Military surgeons could soon be getting hands-on training to help them deal with the horrific effects of bomb blasts using a lifelike model developed by a Swansea University trauma expert.

He then enlisted specialist 3D printing and special effects companies, as well as some hospital colleagues, to bring his prototype models to gruesome “life”. 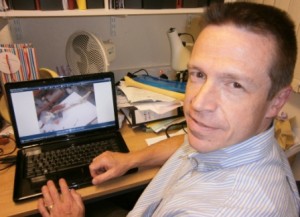 The full-scale model depicts the lower human body with blast injuries, with most of one leg blown off. It’s so realistic it pumps out coloured water mimicking arterial blood and even allows blood pressure to be monitored. The training simulator was demonstrated at the NATO summit in Wales last month and Professor Pallister has plans to develop it further.

He divides his time between Swansea University’s College of Medicine, where he runs the MSc programme in trauma surgery, and Morriston Hospital, where he is honorary consultant in trauma and orthopaedics.

The model came from Professor Pallister’s wish to improve surgical simulation for training in trauma surgery.

“I began by making simple models tailored for the MSc Trauma Surgery programme. We’ve used simulation for a long time but we tend to rely on plastic bones with a simulated fracture, so we can teach people simple step one-two-three type surgical procedures. That is vitally important but the potential for extending the scope and realism of the simulation into more complex decision-making and time-critical intervention was very clear.”

In the summer of last year, the Defence Science and Technology Laboratory’s Centre for Defence Enterprise, part of the Ministry of Defence, launched a competition for innovative concepts in simulation for military medical training.

In response to the call, Professor Pallister was successful in gaining funding to develop what is known as a proof of concept model. He said: “I created a university spin-out company, Trauma Simulation Limited, and was awarded the contract to develop prototype models simulating blast injuries to the lower limb and pelvis. We began work on it in January, using data derived from a CT scan of a volunteer, non-military patient.

Picture: A 3D rendered image of the “bomb blast” injury

“From this we created 3D printed copies of the muscle groups, bones etc, so they could then be cast in custom-made silicon, which reproduces the physical properties of real human tissue. The bones were made of resin, while incorporated within the model is simulated circulation which accurately reproduces arterial bleeding requiring emergency surgical control.”

The 3D printing was done by the National Centre for Product Design and Development Research (PDR) at Cardiff Metropolitan University, and Bridgend-based MBI (Wales) Limited, a specialist company which makes maxillofacial prosthetics and does special effects work for the film industry, helped create the model.

Professor Pallister, said: “I worked with colleagues in Morriston Hospital, who were my sounding boards for advice and help to get the artificial circulation to work and in measuring blood pressure. In simulation terms this is very novel. There are other medical emergency simulators but they work purely through computer controls. To be effective in training, the experience must mimic reality, so the participants become immersed in what they have to do.

“The need to control simulated bleeding in this model in the presence of such realistic injuries, while operating on tissues which feel so lifelike, brings a dimension to training which has never been possible before. The goal is to prepare personnel so effectively that when they have to do it for real it won’t be for the first time because the simulation is so true to life.”

The model has been demonstrated to the MOD and to international journalists at the NATO Summit and feedback has been positive. Professor Pallister added: “We are hopeful these prototypes will be developed further and integrated into defence surgical training over the course of the next 12 months or so. We also want to produce lower-tech versions to train, for example, civilian mine clearing teams how to look after their personnel if they are injured – not for surgery but for emergency first aid.”