A Swansea consultant dedicated to training the next generation of doctors has been honoured for his outstanding commitment. 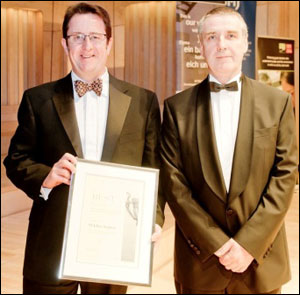 Professor Jeffrey Stephens is held in such high regard by the junior doctors at Morrison Hospital that five of them put his name forward for a Wales Deanery award.

He has received a certificate of recognition for being runner-up in the secondary care category of the 2013 Best Educational Supervisor or Trainer Award organised by the Wales Deanery of Postgraduate Medical and Dental Education.

It was presented to him during a ceremony at the Royal Welsh College of Music and Drama in Cardiff.

Professor Stephens said: “The awards are based on junior doctors nominating educational supervisors.

“I was very humbled and honoured by the fact that five junior doctors at Morriston Hospital nominated me.

“To have recognition from junior doctors that you are doing a good job with their education and supervision was very pleasing for me.”

Professor Stephens qualified in medicine in London in 1994. In 2005 he took up the post of Senior Clinical Lecturer and subsequently Reader in the College of Medicine at Swansea University.

He is currently a Professor of Medicine (Diabetes & Metabolism) at the College of Medicine at Swansea University and a Consultant Physician in Diabetes, Endocrinology and General Internal Medicine at Morriston Hospital.

He is actively involved in both teaching and research and continues as a practicing physician in diabetes, endocrinology and general medicine.

Professor Stephens is also extensively involved in research and clinical trials, and has more than 100 publications to his name.

He has extensive teaching experience at medical undergraduate and postgraduate level and also with allied medical specialities.

In addition he is a member of the Council of Healthcare Professionals for Diabetes UK and Assistant Medical Director for Research and Development within ABMU.

Akhila Mallipedhi, one of the five junior doctors to nominate him for the Wales Deanery award, said: “Professor Stephens has been a supervisor for many junior doctors over the years and has always been very supportive and proactive in helping us improve our careers.

“He is very committed to improving our experience and academic interests as well. We all feel very strongly about him because he actively involves us in different projects that will expand our CVs.”

This news release has been issued by ABM University Health Board Communications Department.