Swansea University’s Department of History and Classics is currently helping school pupils in Swansea and Neath with their literacy through the teaching of Latin – and some of the pupils taking part will now have the opportunity to sit an entry level Latin exam. 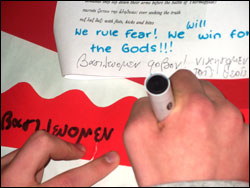 The Swansea University ‘Literacy through Latin Project’ was set up in September 2011 to help support local pupils with language and literacy. Latin is used as a core language from which others (including English) are derived, and pupils learn about language structures in English and Welsh through games and songs in Latin.

Seven schools in the Swansea and Neath areas are currently taking part in the project, which teaches Latin to approximately 300 pupils for one hour each week.

As Year Six pupils from Brynmill Primary School are in their second year of Latin, they will now have the opportunity to sit an Oxford Cambridge RSA Examinations (OCR) Entry Level Latin exam.

The Project Coordinator, Dr Evelien Bracke, said: “This examination is an exciting opportunity which will help to formalise pupils’ achievements and gauge the success of the project. In future years, the exam will be offered to other schools taking part in the project.”

The exam consists of two short tests focusing on Latin vocabulary (and how it has influenced English) and on the understanding of texts. There is also a written component of 400 words, and pupils will have a choice of two topics based on workshops they will undertake at Swansea University in May.

The assessment component of the project is funded entirely by the University, and it is hoped that more pupils will be able to take the exam next year. 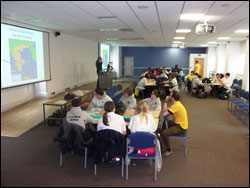 Sian Breeze and Louise Maliphant, Year Five and Six teachers at Brynmill Primary School, said: “We have been impressed with the way that the ‘Literacy through Latin Project’ has focused on English literacy skills through learning some Latin vocabulary and grammar.  Our Year Five pupils are enjoying a new challenge this year and our Year Six pupils continue to impress their Latin teachers with their enthusiastic approach to their learning.

“The Project has strengthened the literacy work we do in a different, exciting context to which the pupils have responded brilliantly.  The project has also contributed to the pupils’ general knowledge about the Romans and Latin's impact on society through history.

“Some of our Year Six pupils will soon be participating in the Entry Level Latin exam, which will give them a recognised qualification to take forward to the future.”