The relationship, which dovetails an existing commercial and research partnership between the two organisations, will mean that the Ospreys will help support the already successful rugby structure at the University by engaging sporting scholars with rugby experts.

Picture:  The launch of the partnership at Swansea University.  Ospreys captain, Swansea graduate, and British and Irish Lion Alun Wyn Jones (left) shows the University's name on the Ospreys shirt.

Players from the University will benefit from nutritional testing and advice, sports psychology, lifestyle planning and strength and conditioning testing and coaching. Swansea University Ospreys rugby scholarships will also be made available for potential students wishing to pursue a dual career path.

The 1st XV University team will continue to be led by existing Osprey Under 20’s Head Coach Richard Lancaster and he will be assisted by Dan Griffiths, Elite Youth Performance Manager at the Ospreys, who has responsibility for the day-to-day management of the region’s development pathway.

There will also be workshops through the season with Osprey senior coaches and players and training sessions with the senior team. As part of the extended relationship, Swansea University’s logo will, for the first time, appear on the Ospreys jersey this season. 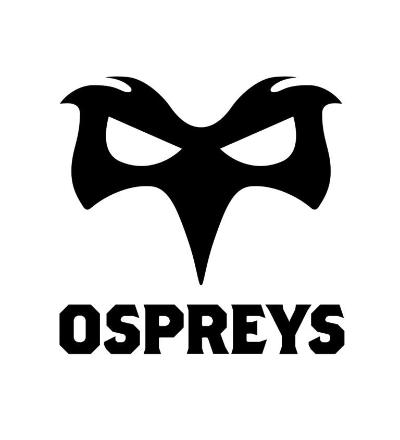 “Some players develop a little later in their careers and it’s important that there are still opportunities for such individuals to prove their ability and that they are confident that the door is not shut to them.

This new structure allows a further level of talent identification for the Ospreys whilst also giving those students with high aspirations an enhanced level of support and rugby education only available from sporting professionals. We are proud that each year 5 or 6 new players gain recognition and exposure to Premiership rugby.

“The University is attracting a higher standard of rugby player with each intake and so we have a responsibility to these students to ensure their development continues.

80% of the individuals in our squads over the past three years have played premiership rugby, 5% playing in the regional LV= competition. We are looking forward to building on this momentum and these already impressive achievements.”

“We are delighted to be able to unveil this new agreement which will see us working more closely than ever with Swansea University. Our extended development pathway sees us investing considerable financial and physical resources to not only unearth the next generation of Ospreys, but to also create better, well rounded people off the field. This tie-up with the University’s rugby programme fits perfectly within the ethos of development from within.

“It’s important to remember that players currently within our regional set-up, such as British and Irish Lions Richard Hibbard and Adam Jones, and current Swansea University student Sam Lewis, did not come through the traditional age-grade structure and were spotted as they developed later than some of their peers.

“By having this association with the University we are providing another avenue for those players who may not have caught our attention at the younger age, while for their part the University gets access to our cutting edge rugby knowledge and expertise – something which will benefits all students involved within their rugby structure,

“This is yet another example of Swansea University and the Ospreys, two businesses at the centre of the local community, working in collaboration to provide opportunities for young people. We hope that this extended partnership will signal a new sense of ownership and a feeling of being part of the Ospreys family for all Swansea University’s 15,000 plus students and we hope to see many of them coming along to the Liberty Stadium this season to support their team.”

Swansea University Pro-Vice-Chancellor Professor Noel Thompson said: “This collaboration is an important part of our efforts to enhance further the sporting experience of students at the University”

“The relationship with the Ospreys is flourishing and both organisations are seeing real benefits from the collaboration. The establishment of this extended pathway is another step forward, building on the introduction of ticket incentives for our student population, research collaboration with our outstanding Sports Science Department and, of course, the University’s sponsorship of the Ospreys’ jersey.”

Swansea University has a proud rugby history and has helped shaped the career of many Welsh Internationals in its 93 year history. Many Welsh legends including Robert Howley, Dafydd James, Stephen Jones, Dwayne Peel and Paul Thorburn studied at the University.

More recently a raft of players such as Alun-Wyn Jones, Richie Pugh, Huw Bennett, Ben Lewis, Jonathan Spratt, Sam Lewis and Nicky Thomas have all worn the University’s iconic green and white jersey before establishing a name for themselves with the Ospreys.

The University play in the British University Premier League each Wednesday and in the hugely popular annual Welsh Varsity Match.  Many players identified by the University have been introduced into the region’s Championship and Premiership sides.