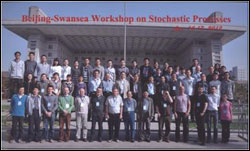 BNU is one of China’s top universities and is home to the strongest probability theory group in the country.

The group, which is known as the “Stochastic Research Centre”, is currently led by Professor Feng-Yu Wang, who is also a research professor in Swansea University’s Department of Mathematics.

Founded in the 1960’s by Professors Shijian Yan and Zhikun Wang, the Centre was established by Professor Mu-Fa Chen as one of the strongest groups working on probability in the world.

Professor Mu-Fa Chen is a member of the Chinese Academy of Science and also an honorary professor of Swansea’s Department of Mathematics.

Swansea University also has a strong research group working in probability theory. In the two latest International Reviews of Mathematics in the UK, this group has been recognised as a significant contributor to the world leading status of theUKin the field of stochastic analysis.

The group has particular strengths in the theory of functional inequalities – the research area of Professor Wang – and the analysis of Jump or Lévy-type processes.

In July 2011, Professor Niels Jacob from the Swansea group gave a course for PhD students at BNU and it was during this visit that it was agreed that the two departments would enter into long-term collaboration, starting with two workshops on stochastic processes.

The first of these workshops took place in Beijing last month and the visit included a very successful four-day workshop, in which members of the two groups and their collaborators presented some of their work.

The visit also provided an opportunity for members of Swansea staff to meet up with a number of alumni who are following successful careers in China.

A second workshop on stochastic processes will take place at Swansea University this October and further collaborative projects are under discussion.