The family of Smiths Electronic Pilots (SEPs) at this time had progressed to SEP5 that had been used successfully for many decades and in numerous Civil and Military aircraft.

I joined their team as a sandwich course student from Glamorgan. At the end of my period of training, in December 1963, I wrote the following note:

"In a very short time my industrial training period with S. Smiths & Sons, Aviation Division, Cheltenham will come to a close after twelve months interesting and beneficial work in the Theoretical Studies Department. The object of this report is to give a summary of the training during the latter half of the year after the transitionary period of accustoming myself to the form of the work.

In the theoretical studies department the work is based on the guidance, control and stability of aircraft during the periods of take-offs, cruising and landing. The combination of higher mathematics and electronic engineering lead to much success in the field of industry with important developments always being evolved to give greater safety and less fatigue to passengers and pilots respectively. This entails a tremendous amount of analytical work, but to assist the engineers and mathematicians, analogue computers are programmed to simulate all flight conditions. The simulators are a relatively simple piece of equipment but do a very efficient job that gives quick and reasonably accurate results. They really are a vital tool as the variation of certain parameters is constantly required to reproduce results that will show what nominal gearings of time constants are to be used by the actual autopilots. I have been concerned with most of the aspects and phases of flight but my reports reflect the bias to the aerodynamics loading on the control surfaces."

In that short period of 12 months, I had been able to utilise a "massive" proportion of my newly found knowledge from the Mathematics in Industry course – this was very gratifying. My experience of analogue computers extended to fashioning complete programs for the aerodynamic simultaneous differential equations in all three planes – yaw, pitch and roll – recognising these ‘time’ excursions were being performed to a limited accuracy, yet giving performance characteristics that became quite clear.

In 1964, the company moved on, investing in an Elliott 803 Digital Computer. As we had moved on to the 803 autocode programming language (the College at Alt yr Yn, Newport had a kind benefactor who presented one to them, which became the system used by Glamorgan College), I think they bought the computer for my sole benefit for, initially, I was the only one who could programme in Autocode – others followed swiftly.

I was able to construct simulation models of flight take-off, cruising and landing where the SEP5 control function engaged with the aerodynamic equations of flight and Runge-Kutta data solutions enabled us to compute all the variables at half second intervals.

The only problem was that of time: a landing manoeuvre from the outer marker (300 ft high) took about 20 seconds of time but the subsequent calculations and output to paper tape took in excess of 2 hours! This gave the system designers a very powerful tool for accurately testing controls and loadings (being simply to change parameters, i.e. fwd cg or aft cg) and for achieving a full set of results. 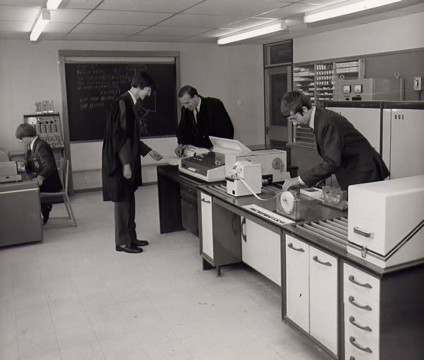 As I had now served my purpose in R&D on computing aids, I was then moved to Hatfield, Hertfordshire in early 1965, driving a full test rig for the De Haviland Trident that had been constructed in a hanger next to the factory.

Did they ever realise what they had let me loose on? The latest technologies, no less. It was not dissimilar to a letting a kid loose in a toy shop! Moreso: five lads needed to rent a house in Borehamwood for the next two years and party every weekend! However, working 60 hours per week was not out of the ordinary.

Although the Trident lost out to the 727 throughout the world, one major coup for Hawker Siddeley was the 35 aircraft sold to CAAC of China.

One thing that the Trident did have in its favour was the ability to land 'blind'. The automatic landing system, developed with Smiths Industries, was finally given full CAA approval in 1972. However by this time the Boeing 727 was established as the market leader and the choice of most foreign airlines. Even so, 117 Tridents were built in total.

This test rig had all the mechanical, electrical, electronic and hydraulic equipment attached to the control surfaces. To this a collection of Pace Analogue Computers completed the ‘loop’, supplying the simultaneous second-order differential equations that are the aerodynamics for pitch, yaw and roll. 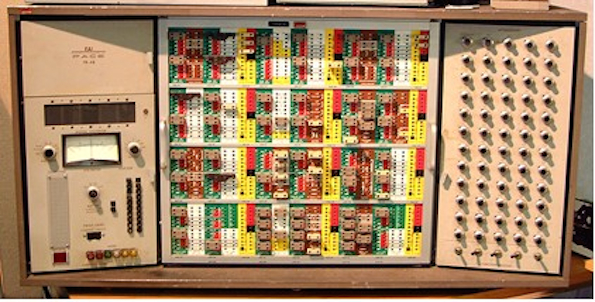 At the same time we had a Trident 1b (G-ARPB – 'Papa Bravo') attached to the project as we were developing, quite specifically,the autoland to Category 3B for the Blind Landing Experimental Unit (BLEU) at Bedford. The two test pilots were Jimmy Philips (all 5' 2" of him) and "Cats eye" Cunningham, famous for his wartime flying.

The whole idea of autoland was to "drive" the aircraft on to the two radio beams that showed displacement from the centreline of the runway and a glide slope of 3 degrees. 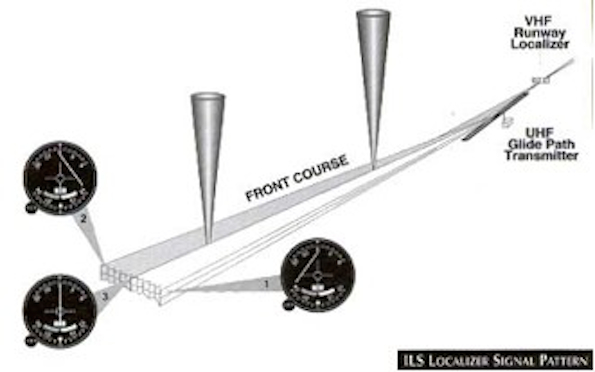 These radio signals are generated by equipment adjacent to the landing strip and adhere to the full specification of the Instrument Landing System (ILS). 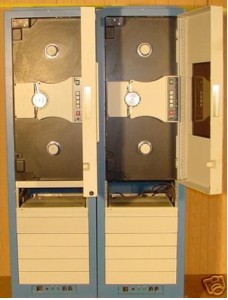 This plane was 'crammed' with recording equipment to put signals onto magnetic tape that was subsequently read and processed in a laboratory alongside the test rig. Ampex 14 channel frequency multiplexed tape drives gave us plenty of capacity for recording transducer, attitude, position and external forces information.

Whilst flying on "Papa Bravo" doing "touch and go" circuits at Hatfield, the autoland chose to flare out and land at 12 feet off the ground – the perimeter fence was coming up fast when Jimmy Phillips eased the stick back to overshoot. Phew!

The on-board STC altimeters were accurate to 1% or 1 foot, whichever was the smaller, but the accelerometer signals that were so critical to the control system were of suspect accuracy. When we were presented with the inertial platform for the famously scrapped TSR2, that gave acceleration in the three axes NS, EW & Vertical to 0.001g, we found it unbelievable.

The logic of electronic analogue computers lends their functionality to match identically that required to drive the system “on board” pitch, roll and yaw computers.

I was fortunate enough to have my Student Apprentice sponsor (Armstrong Whitworth Equipment,Coventry) agree to transfer me to a college that was running the first College Diploma level Computing course in the UK. This, after enrolling in Gloucester Tech. for an external Mechanical Engineering Degree with the comfort zone of living home was to be turned on its head and take me away to this strange land called Wales with a Coal mine at the end of the street where I was in 'digs', half way up a mountain where sheep wandered freely, strange words I couldn’t pronounce nor yet understand and Pontypridd Urban District Council bus clippies translating my destination – ‘Glamorgan College’ in the morning bus stop to a loud stentorian 'School of Mines'. 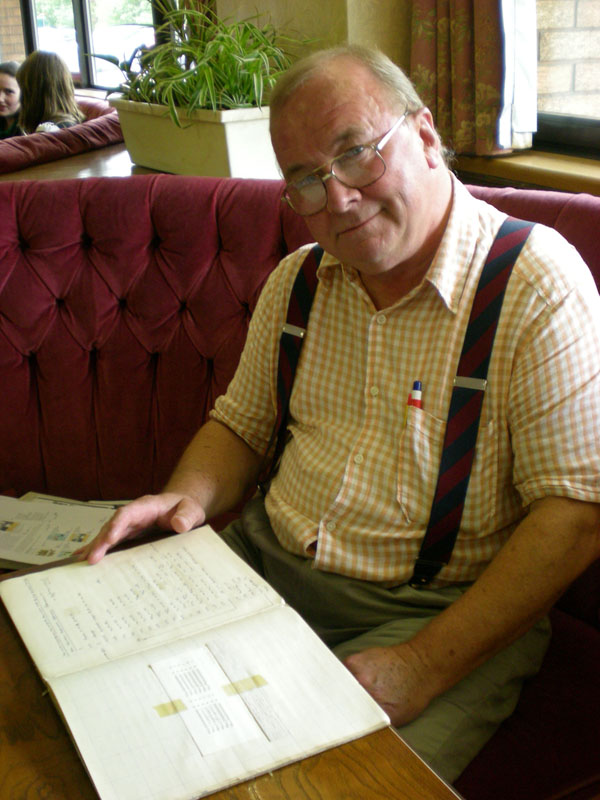 Well true enough – the wealthy Crawshays Steel owners house became the first Mining Engineering College near Pontypridd serving Monmouthshire and Glamorganshire. The very same building would serve as 'Tŷ Croeso' for my studies over the next three years. Being thrown together with eight Welshmen, one Welshwoman and another fellow Lancastrian who, like me had been moved to Gloucester, plus a Moonraker from Wiltshire gave rise to healthy national sporting differences that were usually settled amicably on the skittle alley, dartboard or shove h'penny slate.

Well I digress – I was late – the rest had enrolled in September and here was I turning up a month late in October!

The course was geared to teaching the fundamentals of Mathematics that apply in the ‘real’ world of Engineering with two 'foetal' topics in the form of: 'Digital Computer Programming' and 'Operational Research'.

The College did not yet own a Computer so it was necessary to travel to STC in Newport every other week to test the programs we had prepared in Simple Code for the Stantec Zebra. 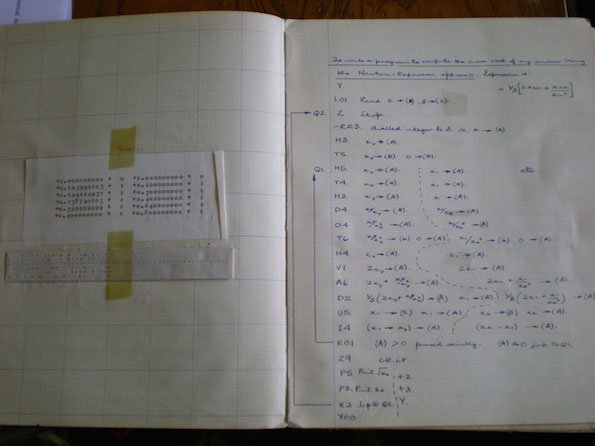 Rod Delamere's programming exercise book from 1961 for the Stantec ZEBRA

The college had an ample supply of Westrex five channel paper tape punches/copiers that most days ‘chattered’ with modifications and changes.

We had the standard book of examples produced by STC for us to follow and Doug Green – our Tutor – who knew the solutions with his eyes closed.

On my first trip to Newport we were ushered into a reception area at the factory in Corporation Rd. (This same factory I came to work in some seven years later.)

We were led into an air conditioned/air filtered room where stood the racks of the Zebra standing some six feet high with a control consul that had an oscilloscope, telephone dial and multiple switches with rows of flashing lights along with the paper tape reader and punch and teletype.

The likes of this I had never seen before – this was the early valve model that must have had a very low MTBF rating – and on subsequent occasions it did fail and had to be fixed before we could continue our testing.

The capacity of this 'number cruncher' was stated to be 150 steps of programming and 150 separate pieces of data.

'Who in their right minds would exceed these massive limits had yet to be found – there was ample space for the largest of programmes' – so we thought.

The Simple Code programming language was anything but – all calculations had to pass through the Accumulator which had to be preserved for future usage and loops used implied Greek character notation to control the frequency.

Later exercises led to the solution of simultaneous differential equations using the trusted Runge – Kutter technique which I was to employ extensively in the area of aerodynamics for Smiths Avionics in Bishops Cleeve, Cheltenham.

Some forty seven years ago, I used to understand quite clearly all the steps to these solutions – it defeats me now but then I am no longer trying as hard and have lost several millions of grey cells in the process.

Unfortunately the Zebra was consigned to history with only a couple of dozen having been sold. There is still one to this day in the vaults of the National Museum of Wales – a solid state version that I persuaded them to collect back in the seventies.

I am glad to say that on subsequent second and third generation computers their version of Simple code became much simpler and easy to understand.