What is in the History of Computing Collection Exhibition

Only a small number of items in the History of Computing Collection are on display. Exhibits include mechanical calculators; IBM, Commodore and Apple equipment; memories; printers; software and programming tools, especially Unix and Linux. Information on the exhibits is contained in the current catalogue.

Currently, the exhibition is to be found in the Department of Computer Science and can be viewed by appointment. Please contact us for further information.

The first digital computer owned by Swansea University was the IBM 1620. The original front panel from this 1620 has survived and is part of the collection.

In November 1961, the Principal of the University College of Swansea, John H Parry (1914-1982), proposed to the Finance and General Purpose Committee that the College purchase its first Electronic Digital Computer, an IBM 1620. The choice of the machine was the recommendation of a committee of interested professors, including Professor James G Oldroyd (1921-1982), Professor of Applied Mathematics, known for the Oldroyd B model of the viscoelastic of non-Newtonian fluids. J H Parry was Principal 1960-65. J G Oldroyd was Professor 1953-65.

The University Grants Committee had offered Swansea a grant of £12,500 towards the cost of purchasing a computer. The IBM 1620 was purchased, with punched card equipment, at a cost of £22,120 (leaving the College to find £9620).

The IBM 1620 was produced between 1959-1970. It was promoted as a scientific computer, having 1620 Symbolic Programming System and Fortran, and was bought by many Universities in the USA, UK and elsewhere. Some 2000 machines were made.

The first model was modest. The 1620 had the code name CADET (Computer with ADvanced Economic Technology), which was reinterpreted as "Can't Add, Doesn't Even Try", since it used tables in memory rather than dedicated arithmetic circuitry. A Model II, with improved arithmetic capability, was released in 1963.

The front panel of Swansea’s IBM 1620 survives and is exhibited along with: some of its logic; a newspaper photograph of the use of the 1620 demonstrating newspaper typesetting; and a textbook devoted to learning how to program the 1620.

A manual calculator for hexadecimal numbers.

The device does simple addition and subtraction of hexadecimal numbers (numbers in base 16). The dials can be turned using a stylus stored in the bottom right-hand corner of the device.

IBM engineers maintaining the IBM System/360 range of computers used hexadecimal adders.  The IBM 360 series popularized the use of 4-bit hexadecimal numbers as a method for making short representations of long binary numbers, which were needed for addresses in memory.

Engineers investigating software problems for the operating system and application programs used the calculator to calculate addresses in memory. System/360 used truncated addressing, in which instructions do not contain complete addresses, but rather specify a base register and a positive offset or displacement from the address held in the base register. To find an address the offset was added to the base address. Contemporary programmers were used to direct addressability of any memory cell and so not being able to know by looking at an instruction where its data are located was considered inconvenient.  Truncated addressing was suitable for the design of System/360 since its instructions were common to a series of machines with significantly different specifications.

The invention of the hexadecimal adder is attributed to an IBM programmer, Carl J Lombardi. In the 1960s, he made a wooden prototype at home. He used this to demonstrate his design to colleagues at IBM and to the Sterling Plastics Company, who were later given the contract to make the calculator.

George and Mary Staab operated Sterling Plastics in Mountainside, New Jersey. The company created a range of mathematical instruments. Sterling had created a popular decimal calculator, similar to the hex calculator, the Dial-A-Matic. A patent for the calculator is US Patent 2,797,047 (filed April 30, 1954; published June 25, 1957). Sterling Plastics bought the Acu-Rule Manufacturing Company in 1968, an important slide rule company founded in 1938. In 1970 Sterling Plastics was sold to Borden Chemical; the last products appeared in 1972.

The International Slide Rule Museum has a wealth of material on products and manufacturers, including Sterling and Acu-Rule.

Issue: Made by IBM in the United Kingdom 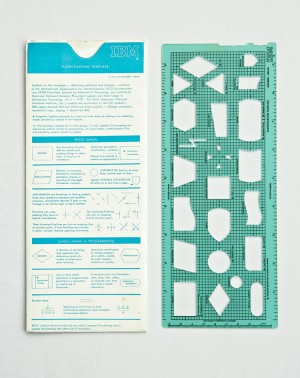 This stencil is for drawing flowcharts, which allow one to visualise the logical structure of an algorithm. The stencil helped to standardise IBM’s systems analysis methods.

Flowcharts were introduced as a tool to plan programs in an influential report by Hermann Goldstine and John von Neumann in 1947. Subsequently, various international standards were established.

Flowcharts are one of many forms of diagrams that have evolved to describe programs and, more generally, processes of many different kinds. The diagrammatic method seems to been applied first to processes by Frank Bunker Gilbreth and Lillian Moller Gilbreth in 1921.

The 6063 ruler as used by Systems' Analysts

The ruler was created for the designers of forms and for systems analysts. It has scales on all its four edges, and features for examining size and position of symbols for magnetic ink character recognition (MICR), drawing flowcharts, and punching holes.