In the Shipping and Trade Law department at Swansea, we have always tried to ensure a holistic approach to our postgraduate life.

One aspect of this is our Mooting module launched this year. No fewer than 25 LLM students took it up and got some superb training from Dr Nima Tabari and Ms Tabetha Kurtz. As part of their assessment, the Mooting module students participated in an internal mooting competition. The final was held on 24 February by invitation at the Supreme Court in Parliament Square.

Six finalists went to the Supreme Court for the final round (two teams, each made up of two speakers and one researcher). Apart from the honour of appearing in one of the most prestigious legal venues in the world, our students had the privilege of speaking before the august and urbane Lord Clarke and his judicial assistant, Kabir Bhalla.

Lord Clarke with the Swansea Mooting Teams at the Supreme Court

After thorough arguments and highly challenging questions, the Respondents (leading counsel Tom Goovaerts, ably assisted by his junior Breeda Okpo and researcher Liangyuan Xi) won the case on the merits, while the Appellants (leading counsel Kirsten Jackson, junior Jacqueline Dammens and researcher Fransisco Camps-Bas) won the moot overall. Lord Clarke noted his approval of the realism and complexity of the moot problem, but more importantly praised fulsomely the quality of arguments offered by the students, commenting particularly on their ability to think on their feet and respond to sophisticated queries from the Bench.

In overall charge of the arrangements, which went like clockwork, was Dr George Leloudas. But this was a team effort by all those teaching on the LLM, including Associate Professor Nikaki, Professors Simon Baughen and Andrew Tettenborn (who all contributed to the success of the event by making themselves available as judges at practices and initial rounds).

The Mooting Teams with their classmates at the Supreme Court

Proudly commenting after the event, Dr George Leloudas stated: “The appointment of Elwen Evans QC as the Head of the College is a clear indication of the University’s desire to cement the ties we have already formed between legal practice and academic education. To this end, the introduction of the new module on mooting could not have come at a better time. We were enormously proud to have been invited this year to hold our internal mooting competition final at the Supreme Court. We are especially grateful to Lord Clarke and Mr Bhalla, who chose to lend their valuable expertise to us by judging our final, offering unique practical and legal experience as well as invaluable training advice to our students. This is yet anotherrecognition of the reputation our LLM degrees have gained within the last two decades for academic rigour and applicability to the practical world of commercial and maritime law. Last but not certainly not least, we have reason to be extremely proud of the efforts of our LLM students, whose enthusiasm for the new module and the course itself led them to give up long hours of their spare time in order to prepare for this event.” 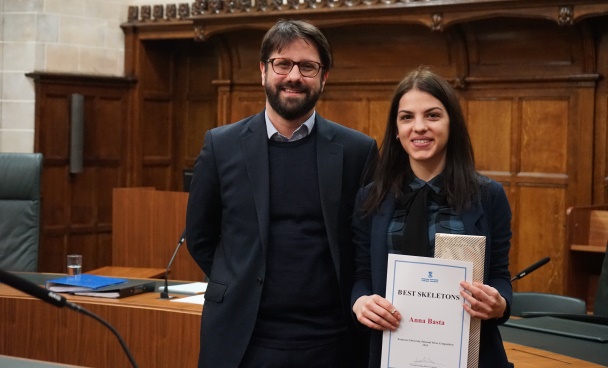 The finalists received their awards from Lord Clarke at a reception held after the event. In addition a number of other prizes were awarded to Anna Basta, Fransisco Camps-Bas and Tom Goovaerts for the best skeleton arguments and to Yeling Cheng, Chloé Guilfoyle and Hengming Ye for showing the most marked improvement in advocacy.