The Inspire! Awards are hosted each year ahead of Adult Learners’ Week and are coordinated by the Learning and Work Institute, with support from the Welsh Government and the European Social Fund. They acknowledge individuals who have shown outstanding passion, commitment and drive to improve themselves, their community or workplace through learning.

Andrea took the Life Change and Progression award, as one of 12 winners who were recognised in a ceremony at The Exchange Hotel in Cardiff last night.

The single mum-of-three from Port Talbot, suffered severe anxiety attacks, depression and a devastating bereavement as she studied full-time to follow her childhood ambition of becoming a lawyer. Against the odds, she obtained a qualifying law degree at the age of fifty one, graduating with an LLB in Law in 2018, thirty five years after leaving school with no qualifications. 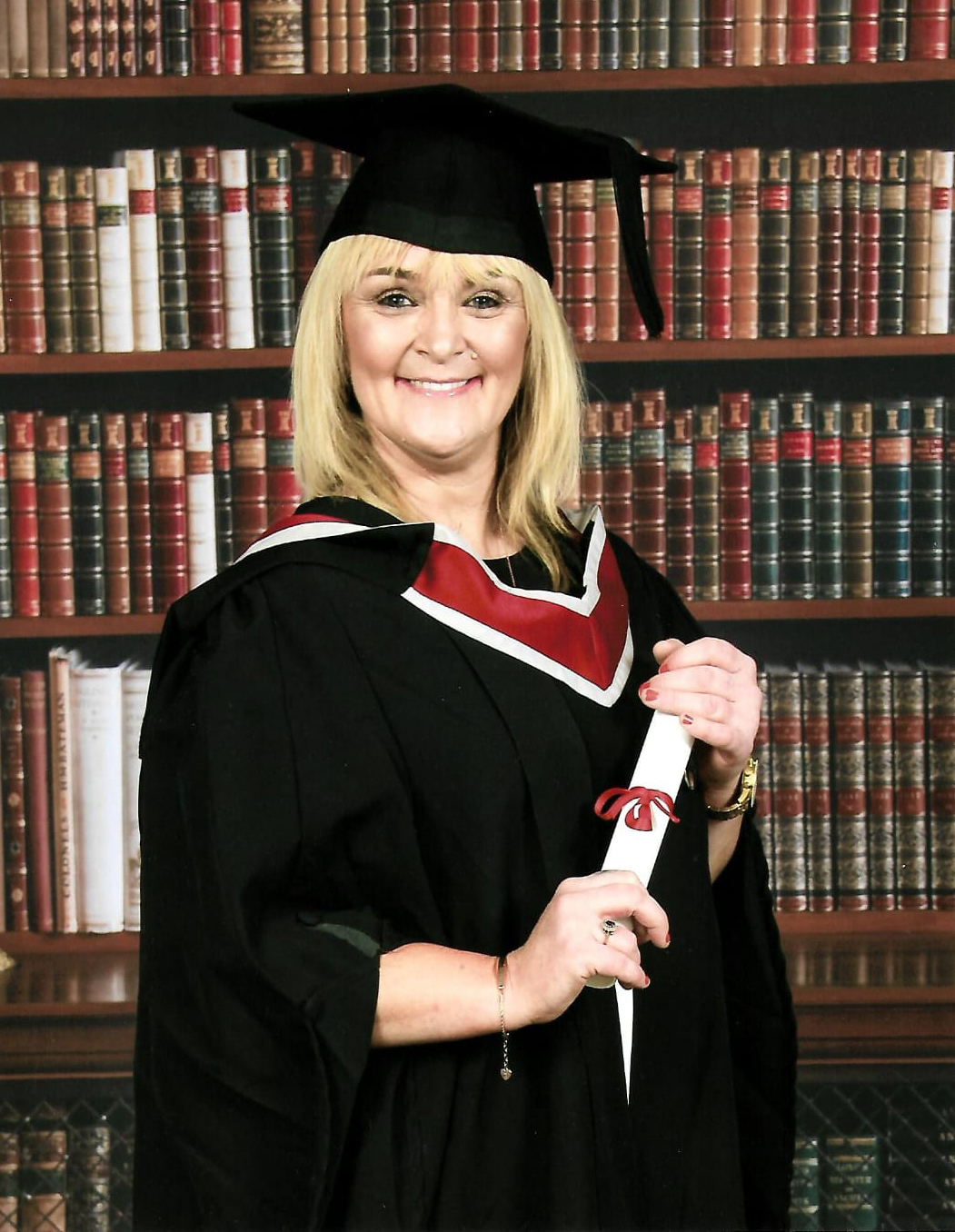 Speaking of her determination to study law, Andrea said:

“From a very young age, I only ever had one dream, and that was to study law. Circumstances were not on my side, after falling pregnant at sixteen, I know that I had to put everything I could into being the best mother I could be, and that my dream would have to wait a while.

“I continued reading the law supplements in the papers, I had shelves full of legal books, I would stay up late at night reading cases about miscarriages of justice, and it fired my absolute belief that the truth shall set you free, my passion never wavered.

“Once I was made redundant from my job, I knew that was my moment, my opportunity, I finally applied to study law and it meant everything to me”.

Andrea overcame immense difficulties during her studies. Juggling her family and home commitments to her three children, making financial sacrifices, and dealing with reoccurring issues of anxiety and depression, alongside her studies was challenging. However, discovering that her sister Kay had terminal cancer hit her the hardest.

Andrea became the primary caregiver for her sister. She recalls driving her sister to chemotherapy sessions in the nearby hospital, and dipping in and out of classes between sessions, before rushing back to the hospital.

“It was the most difficult time of my life”, said Andrea.

“Some nights I wouldn’t be opening my books until 11pm after looking after Kay. It wasn’t uncommon for me to go to bed at 4am. And when Kay passed away last February, I was devastated”.

Andrea received support from her lecturers and from the university Health and Wellbeing Academy. Despite suggestions that she could defer for a year, and take some time to grieve, Andrea chose to carry on with her studies.

“My tutors were really helpful and suggested I defer for a year but I knew if I stopped, I’d never go back. So I carried on, determined to make Kay proud.”

Andrea returned to classes and persevered through her pain. She began working on the Miscarriage of Justice Project with Professor Richard Owen. Her work on the project led to a nomination for the ‘Best Contribution by an Individual Student’ award at the 2018 ​LawWorks and Attorney General’s Student Pro Bono Awards. Her research led to new lines of inquiry being opened on a case, she was invited to visit the House of Commons, and she presented her findings to an elite panel of judges, solicitors, barristers, practitioners, and members of the police force.

“Working on the Miscarriage of Justice project was a saviour for me, it was the one area of law that has always fascinated me the most. And it was the first year that the module was available in the university. I knew it was meant to be.

“The work didn’t cure my anxiety or depression, but it certainly helped me to focus for long periods of time, and has made me feel stronger every day.”

Andrea, who was nominated by her daughter Lucie Collins, says she wants her Inspire! win to demonstrate to employers that mature learners often defy overwhelming odds to achieve in learning.

“Learning has changed my life. Mature students often have more issues to overcome such as family commitments, health issues and often no previous formal qualifications,” she said.

“It is a massively brave decision to re-enter learning. Now we need employers to give us a chance, we deserve that.”

"Now more than ever we understand the impact that going back into learning can have on making people healthier and happier, as well as improving prospects for their families and at work.

"We hope these stories will inspire adults from every corner of Wales to take that first step back into learning. There are opportunities to learn out there and professionals ready to help you access the support you need. So if you have been inspired, now is the time to act and to start learning again."

Andrea’s next goal is to graduate with an MA in Applied Criminal Justice and Criminology, for which she is half way through her studies. She hopes in the future to open up a law clinic in Port Talbot and provide a hands-on environment for other students to gain advocacy experience whilst providing pro bono support, for those who can no longer access Legal Aid.