On Monday January 28th, law student Tahmid Miah was chosen to represent the Hillary Rodham Clinton School of Law and the Swansea Law Clinic, by giving evidence at The National Assembly for Wales. 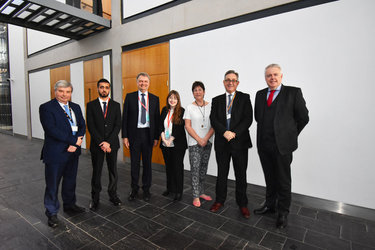 Final year student Tahmid, contributed evidence alongside the Director of the Swansea Law Clinic, Professor Richard Owen, to the Constitutional and Legislative Affairs Committee on the Legislation (Wales) Bill.

Concerns have been raised for many years about the complexity of the law in the United Kingdom. The purpose of the Legislation (Wales) Bill is to make Welsh law more accessible, clear and straightforward to use. The upcoming Bill looks at the interpretation and operation of Welsh legislation, and requires the Counsel General and the Welsh Ministers to take steps to improve the accessibility of Welsh law.

After submitting his evidence to the committee, Tahmid said: ‘Our current legislation is quite confusing. We are witnessing clients who are struggling, who are not eligible for free legal aid due to the high threshold, and who cannot understand the legal terminology presented to them.

‘I hope the Legislation Bill will explain the law in a more clear and simple way as this would make it more accessible to the public.’

Professor Richard Owen said: ‘I’m incredibly proud of Tahmid. I do not know of any other undergraduate student giving evidence to their country's legislature on their clinical work, and he acquitted himself brilliantly.’

For more information on the Swansea Law Clinic, see: https://www.swansea.ac.uk/law/lawclinic/