Pupils at Blaenymaes Primary School are celebrating being granted an Inspire Award by the Diana Award, the organisation set up to continue the pioneering work of the late Princess of Wales.

The award won by pupils at Blaenymaes was granted under the Diana Award’s Inspire Series. This series aims to celebrate and empower courageous young citizens from across the UK in Diana, Princess of Wales’ name.

Blaenymaes Primary School is a Rights Respecting and restorative School that places children at the heart of its work and seeks to promote respect, inclusion and equality.

The Diana Award was specifically given to a team of pupils called the Rhodri’s Rangers who, as volunteers, make a difference to school life and improve the wellbeing of their peers. The Rangers have raised awareness of bullying, written their own child-friendly anti-bullying policy and worked in partnership with the Innovative Youth Justice Team at Swansea University’s College of Law and Criminology to understand how life at school can be improved for all.

Commenting on the work of the Rhodri’s Rangers, family inclusion officer at Blaenymaes Primary School, Helen Spencer said: “I was absolutely delighted that the Rangers were recognised in this way. It really is hard to state just how important their work is. Between them, the Rangers make it clear that bullying is not something that can be tolerated in school. Instead, what they do is to promote the idea of our school being a family, where, because each child has rights, everyone is entitled to respect”.

Recognising their achievement, the Rangers were presented with their Diana Awards at a special assembly by Professor Elwen Evans QC, head of the College of Law and Criminology. Swansea University is a partner in the work of the Rhodri’s Rangers and, reflecting on the success of the Rangers, co-ordinator of the Innovative Youth Justice Team at the University, Dr Anthony Charles, said: “This award is well deserved. Rhodri’s Rangers are tireless ambassadors for anti-bullying approaches and their work makes such a difference. Not only have the children designed and implemented measures to make the lives of all pupils safer and better, but they have also contributed to valuable research to ensure that what they are doing is creating a positive effect. In fact, the research undertaken has been recognised by Estyn, such is its quality. Blaenymaes is a forward-looking school that deeply invests in its pupils and the excellent work of the Rhodri’s Rangers exemplifies this”.

The Rangers are now looking forward to planning new initiatives which will be run out across their School in September, initiatives that will continue to challenge bullying and to promote a friendly and inclusive school family at Blaenymaes Primary School. 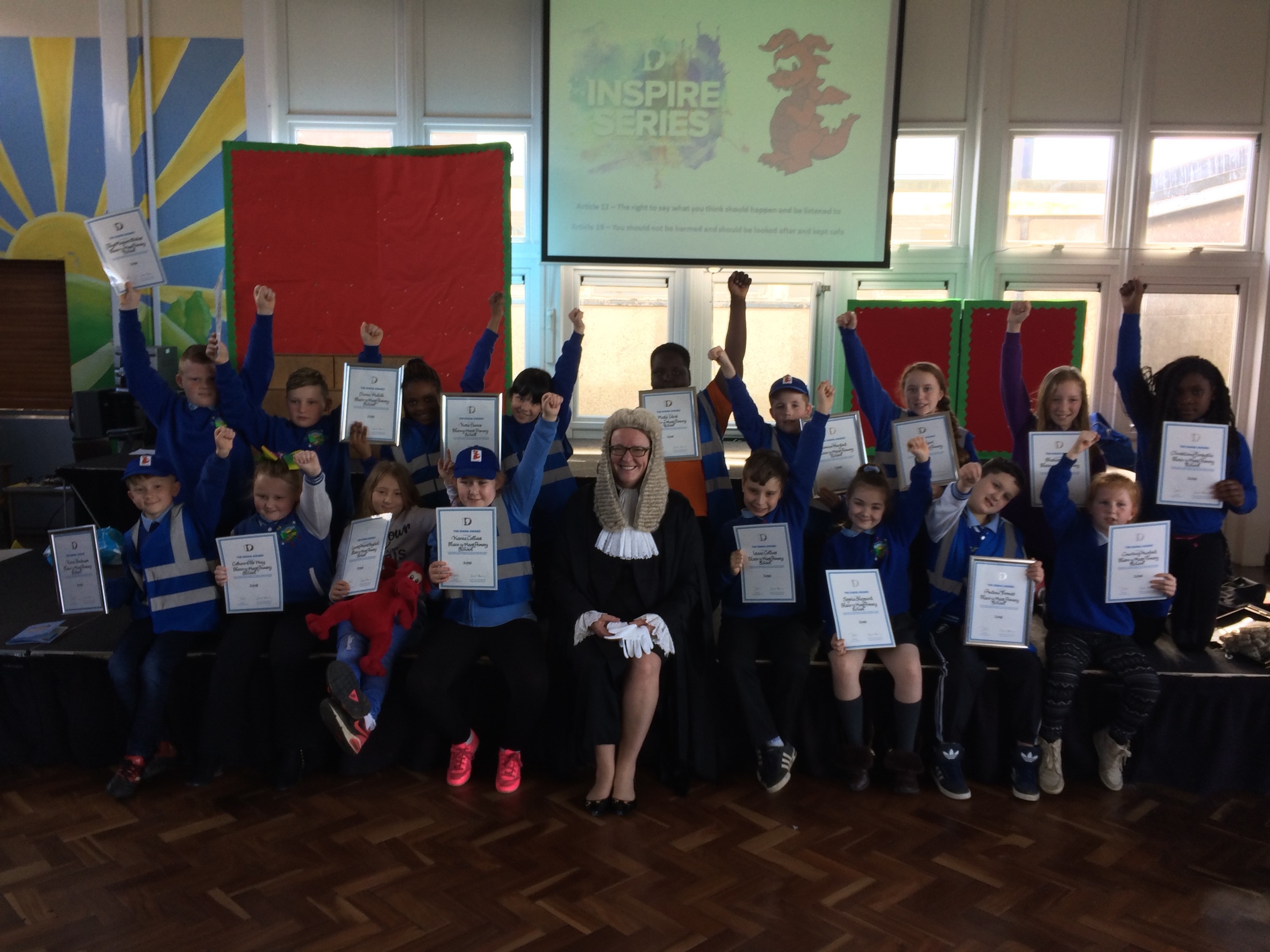 Professor Elwen Evans QC, head of the College of Law and Criminology celebrating with the Rhodri’s Rangers.