The Institute of International Shipping and Trade Law (IISTL), a University-recognised research centre and leading international forum on shipping law issues, convened its seventh annual international Colloquium on 13-14 September 2011. The annual colloquia have provided a popular opportunity to examine timely issues of shipping and trade law, in the company of expert speakers and delegates drawn from around the world. This year’s event was no different and was devoted to legal issues relating to pollution at sea. This issue is especially pressing, in the wake of the Deepwater Horizon disaster and the ongoing development of international rules on compensation and liability.

As with its predecessors, the Colloquium provided a platform for vigorous and informed debate on significant ongoing and emerging aspects of the subject. Speakers and delegates represented no less than eleven different jurisdictions and encompassed leading figures from international regulators, legal practice, academia and the shipping and insurance industries. The Colloquium addressed a range of topics, including the regulation of hazardous and noxious substances; liability for ships’ bunkers, offshore installations and crafts; the development of EU law on pollution claims; environmental salvage; P & I cover for pollution; criminalization of seafarers; the regulatory impact of port state control; and the legal liability of a number of unexplored potential defendants. 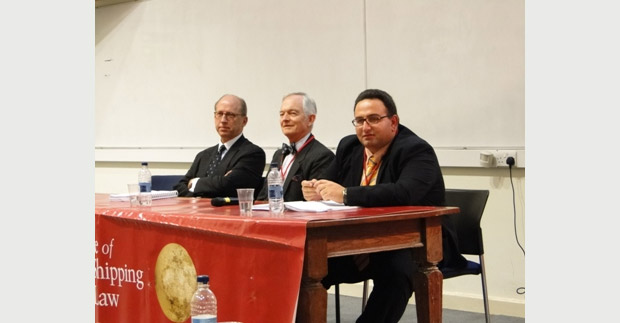 Commenting on the Colloquium, Professor Baris Soyer, Director of the IISTL, said “it is very pleasing to see that our annual colloquia have become firmly established as a key fixture in the international maritime law calendar, attracting not only academic lawyers but also leading legal practitioners and industry experts. One of the primary objectives of the IISTL is to bridge the gap between academia and practice and this event goes a long way in achieving that goal. I would like to take this opportunity to thank all the speakers, delegates and particularly the members of the IISTL for their support in making this another highly successful event.”

The papers presented at the Colloquium  formed a major new book on this important issue (Pollution at Sea) published by Informa Publishing in 2012.