IISTL stages innovative Colloquium programme on the Law of the Sea

Sixth IISTL Annual Colloquium on the “New Uses of the Sea”

On 9 – 10 September 2010 the Institute of International Shipping and Trade Law at Swansea University hosted its Sixth Annual Colloquium. The IISTL Colloquia, first launched in 2005, have swiftly established themselves as a highlight of the academic programme concerning maritime law in Europe. The Sixth event marked a departure from previous Colloquia by examining the public international law of contemporary ocean usage. The Colloquium took the theme of “New Uses of the Sea”, focussing on a number of issues of emerging importance to shipping and the regulation of the marine environment.

A number of topics were explored within the Colloquium, which opened with an appraisal of the modern law of navigation, examining the regulatory implications of retreating ice coverage, compulsory pilotage programmes, the development of high seas protected areas and security concerns for international shipping. The event then addressed the effects of shipping upon the marine environment, including a discussion of vessel-source noise, ballast water, scrappage and biodiversity considerations. The second day of the Colloquium examined emerging challenges of climate change and alternative energy sources, including analyses of deep-water oil extraction, marine windfarms, underwater electricity provision and carbon storage. New developments in marine resources were also considered, including an appraisal of pipeline activity and the exploitation of underwater cultural heritage. The Colloquium closed with an analysis of responses to ship-source pollution, with discussion of environmental salvage and the role of government intervention in shipping accidents.

A number of highly distinguished guests and speakers contributed to the Colloquium, including senior members of the International Tribunal for the Law of the Sea, leading academics and practitioners and key figures within national and intergovernmental organisations:

Judge Professor Rüdiger Wolfrum (International Tribunal for the Law of the Sea and Max Planck Institute for Comparative Public Law and International Law, University of Heidelberg) 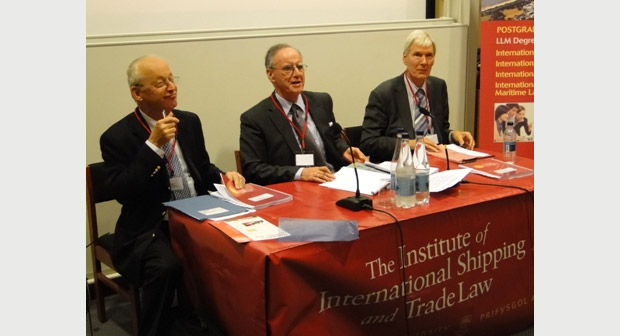 The Colloquium was attended by a considerable number of delegates drawn from a variety of professional backgrounds, ranging from academia, professional practice, national government and international courts. The papers generated a lively debate and a valuable reappraisal of important issues that will affect the global and regional governance of marine affairs in the coming decades. Dr Richard Caddell, co-organiser of the event, said “the Colloquium presented a very timely opportunity to examine a number of emerging topics within the modern law of the sea. The wide range of delegates and speakers, and the interactive nature of the Colloquium, certainly made for an extremely enjoyable, informative and thought-provoking event”. The IISTL is looking forward to following up this first event of the new academic year with a full programme of activity.