In addition to the increased amount of charterparty disputes facing the sector in recent years as a consequence of the global financial crisis, vigorous debates as to the potential impact of the new Carriage Convention, also known as the Rotterdam Rules, are currently taking place in various parts of the shipping industry. The Rules, if adopted, will bring about significant changes for all parties involved in the carriage of goods by sea. Against this background, it was natural for the Institute of International Shipping and Trade Law, as an institution that prides itself in bridging the gap between practice and academia, to devote its Fifth Annual International Colloquium to this highly topical matter. The focus of the event was the Rotterdam Rules, although it also provided an excellent opportunity to address significant legal issues arising out of cargo disputes from the perspective of other international regimes, such as Hague, Hague-Visby and Hamburg.

The quality of papers presented by the distinguished speakers carefully selected from practice and academia was very high, providing an opportunity to the delegates to engage in lively debates.  The delegates, who constituted a lively and varied mixture of academics, legal practitioners and representatives from the Government (Department for Transport) and P&I clubs, found the event and the social programme to be excellent. It was especially pleasing to see that the Colloquium was successful in attracting a significant number of delegates from the Continent- an indication of the further international recognition of the Institute's activities. 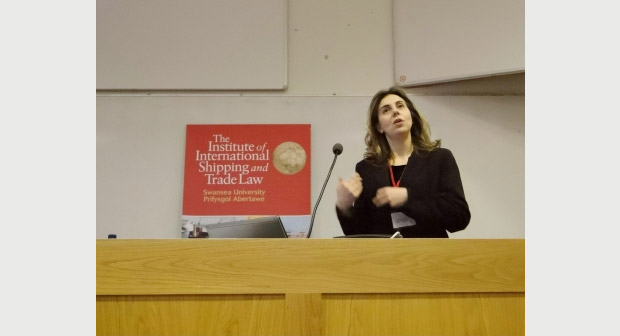 Dr Theodora Nikaki (ISTL, Swansea University) presenting her paper on the impact of the Rotterdam Rules on Himalaya clauses

The following experts in the field delivered papers at the Colloquium:

Members of the audience attending the Colloquium

Informa Publishing has published the papers presented at the Colloquium in a book format entitled "The Carriage of Goods by Sea Under the Rotterdam Rules". The next annual coloquium of the Institute will take place in September 2010 and details will follow.