Carriage of Goods-Sea Transport and Beyond (2012)

Carriage of Goods-Sea Transport and Beyond (2012)

The IISTL Stages Yet Another Impressive Event

Swansea Law School's Institute of International Shipping and Trade Law held its 8th Annual International Colloquium at Swansea on 6-7 September 2012. This year's event was dedicated to carriage by sea and other modes of transport and the relations between them; as ever, it created lively debate not only on carriers and cargo owners, but on the legal position of market participants such as terminal operators, freight forwarders and cargo insurers.

The meeting, very generously sponsored by Informa Publishing Ltd, attracted a record number of delegates to Swansea from the UK, Europe and beyond. Papers, presented by academics, practitioners and industry experts, included:

Dr Theodora Nikaki (IISTL, Swansea University)- Is There A Need for A Distinct Legal Regime for Carriage of Goods by Land? 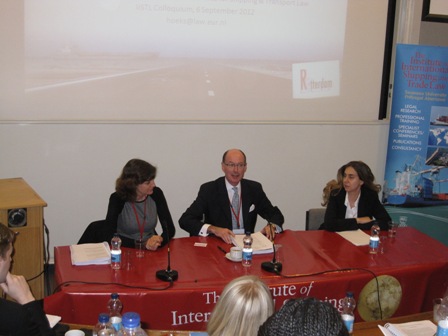 The Hon Mr Justice Blair was actively involved in the discussions, and chaired one of the sessions. Commenting on the event afterwards, Professor B. Soyer, the Director of the IISTL, said: “The IISTL Colloquia, first launched in 2005, have swiftly established themselves as a highlight of the academic programme concerning maritime law in Europe. It gives us a great pleasure to make a contribution to the maritime learning and practice by holding this event. The significant increase in the number of delegates attending this year’s Colloquium is a clear indication that the IISTL is a leading player in maritime education and that the maritime sector fully embraces the IISTL and its ethos.”

The papers presented at the event will, as always, were published by Informa Publishing Ltd in 2012  a book titled Carriage of Goods by Sea, Land and Air; Uni-modal and Multi-modal Transport in the 21st Century