10th Annual Colloquium of the IISTL - Another Resounding Success

10th Annual Colloquium of the IISTL - Another Resounding Success

The 10th Annual Colloquium of the Institute of International Shipping and Trade Law (IISTL) was held this year on 3-4 September. By tradition, each of these events puts a particular aspect of shipping or commercial law under a searching spotlight. On this occasion, the focus was on contemporary developments in shipbuilding, ship sale and vessel finance, areas of law that have changed an enormous amount and taken on an entirely new relevance since the commencement of the global economic downturn in 2008. Examples of fast-moving areas of law covered in the proceedings this year included the cancellation of shipbuilding contracts, refund guarantees, changed practices in ship sales and developments in ship mortgage enforcement, whether by judicial sale or otherwise. 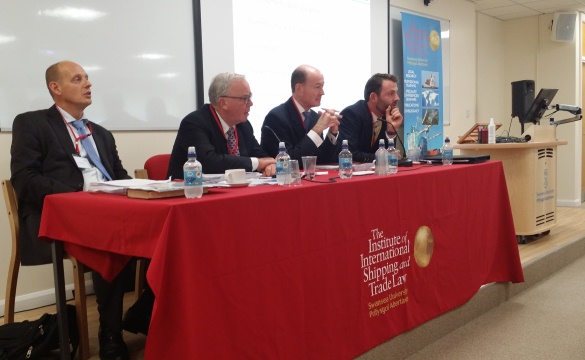 Present this year was the usual impeccable cast of legal practitioners, brokers and academics from the UK, Europe and elsewhere. It was a particularly great honour to welcome a member of the Supreme Court, Lord Clarke of Stone-cum-Ebony, who chaired a session and also very kindly agreed to write the foreword for the book of the colloquium proceedings. These, under the editorship of Professors Soyer and Tettenborn, were published by Informa in 2015 in a  book titled Ship Building, Sale and Finance. As ever, the speakers were carefully-selected, providing a balance between disciplines but nevertheless ensuring that all were professionals at the cutting edge of their disciplines.

The lengthy debates carried out at the end of each session were testament  to the fact that the participants had been well-chosen.The following papers were presented at the event:

“‘As Is’… as you were? The Union Power and “As Is” Provisions in Ship Sale and Purchase Contracts” (Simon Rainey QC, Quadrant Chambers, London)

After the event, Professor Andrew Tettenborn on behalf of the IISTL said:

"The enormous success of this Colloquium shows, if it needed to be shown, that the Swansea IISTL, having started from literally nothing in 2000, is now unquestionably the premier UK university research group dedicated to commercial law, recognised by faculty, lawyers and judiciary alike. This bodes enormously well for its activities in the next year, and promises that next year's Colloquium, which will mark the tenth anniversary of the inauguration of these events, will be a similarly triumphant occasion."