Representatives of The Centre for Innovative Ageing (CIA), based in Swansea University's College of Human and Health Sciences, travelled to India this September to forge a collaborative link with Burdwan University. 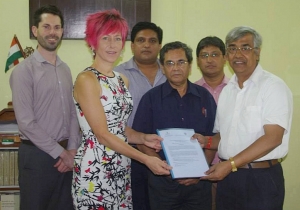 Funded by a UGC-UKIERI grant, Professor Ness Burholt and Dr Paul Nash travelled to Burdwan in West Bengal, India where they embarked on a series of lectures, seminars, networking events and engagements with senior academics and governmental figures. The aim was to highlight the need for research into gerontology in India and to establish a centre at Burdwan University where this could be focussed.

During the visit, Prof Burholt, Dr Nash and their counterparts in India, Prof. Bandyopadhyay, Dr Biswas & Dr Saha met with Burdwan University VC Prof Smritikumar Sarkar where the principles of the collaboration between the Centre for Innovative Ageing and Burdwan University were formally signed, forming The Centre for Interdisciplinary Research on Ageing and Gerontology (CIRAG).

Dr Nash said: "This pioneering work is paving the way for Burdwan University, as CIRAG is India’s first Interdisciplinary research centre for gerontological research and as such stands to be at the forefront of developments in this rapidly expanding field. In addition to being part of the project team, Prof. Bandyopadhyay is also the VC of Bankura University, a new university established to meet the needs of rural communities in West Bengal. It is likely that CIRAG will span both Burdwan and Bankura, providing gerontological education and research facilities to both urban and rural communities, furthering the commitment to rural ageing so firmly expressed by the CIA."

The first collaborative research proposal has already been submitted by the CIA and CIRAG and the first PhD students are on track for registration.

Dr Nash continued: "It was a whirlwind visit to India but over the next 2 years, the UGC-UKIERI grant will fund the academic team and students from India to travel to Swansea and see how the CIA is breaking new ground in the UK, as well as to allow the Swansea team to travel back to Burdwan and continue the promotion and expansion of CIRAG.

The CIA has strategic links across vast swaths of India but this partnership is the first formal agreement and ushers in a new era of collaboration firmly placing the CIA and Swansea University at the cutting edge of global gerontology."