Two Paramedic Science students from Swansea University’s College of Human and Health Science saw off tough competition to win the this year’s EMS Clinical Challenge, held at the EMS UK Learning event in Cardiff this month. 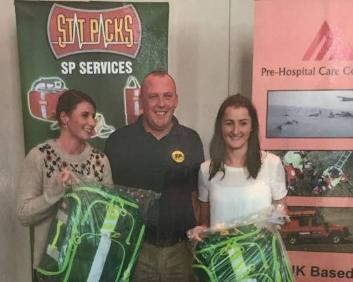 Jess Thomas and Lucy Clyne performed in front of an audience and a panel of judges and were the only team of students to take part in the challenge.

Lucy said: “During the EMS learning day we were persuaded to sign up to take part in a EMS clinical challenge.  We were against the HART team, paramedics, advanced paramedic practitioners and various other Welsh Ambulance Service staff. Realising we were the only students taking part we tried to opt out but we thought we'd make the most of the experience…we were very nervous due to the calibre of the competition and performing in front of our peers.”

Jess said: “We all had the same scenario of a time critical patient requiring advanced airway techniques; we used our knowledge and team work from the Paramedic Science course to work through the scenario. We performed needle cricothyroidotomy, which we had an exam on the week before, and various other skills we've achieved.

“The paramedic team and HART team came joint second and we were convinced we'd come last.   Having only just gone into our second year of studies and with no previous experience in clinical care before studying at Swansea, we thought we didn't stand a chance against professionals.

Lucy added: “We've had such a lovely response from so many professionals and our lecturers, we took part and had fun we didn't expect anything to come of it. It was such a surprise to find out we'd won the challenge, we were in disbelief but were overjoyed.”

Lucy and Jess walked away from the competition with a trophy, a £250 response bag, a £500 paediatric course and another 2 day course of their choice.

Neil Hore, Programme Manager for the Paramedic Science course, said: “This is a fantastic achievement for the students; they competed against 5 teams comprising of registered practitioners involved with the emergency medical services including representatives from the hazardous area response team as well as ambulance and RRV paramedics.

“We are extremely proud that these students not only had the courage to perform in front of a critical audience and win, but also that they have continued to build on the successes of previous paramedic science students at national events.”