Swansea University proudly celebrated International Women’s Day 2018 which saw staff and students coming together in solidarity to ‘Press for Progress’ for gender parity.

International Women’s Day celebrates the achievement of women throughout history and across the world.

Thursday 8th March marked the day where Swansea University honoured the women, pioneers and activists who fought hard for women’s right to vote in the UK.

A wide variety of events, hosted on both campuses, were integral to the celebrations and to mark this anniversary centenary year of the Suffragette Movement in the UK.

Prof Joy Merrell, Professor of Public Health Nursing , said: ‘Swansea University is committed to promoting gender equality which has been recognised by achieving an Athena SWAN Institutional silver award in 2017. Celebrating International Women’s Day this year was particularly poignant as we also honoured the centenary of pioneering suffragettes who campaigned for women’s right to vote in the UK. Whilst much has much achieved regarding women’s rights over the last 100 years in the UK there is still much to do especially on terms of the gender pay gap. Staff and students came together to `Press for Progress’ and we sang the United Nations `One Woman’ song to demonstrate our solidarity with women from across the world who are experiencing injustice, oppression and inequality. We raised money for two charities Project My Girl in Malawi and Women’s Aid. Whilst there was a serious message we also celebrated our successes and achievements and ate cakes iced with the Athena SWAN silver logo.’ 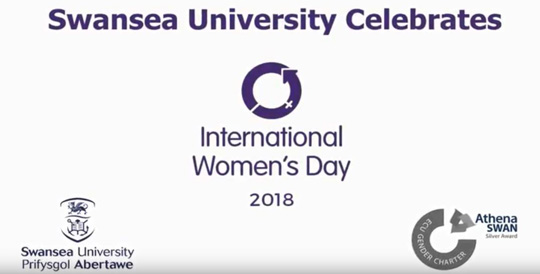