Jodie Croxall, from Swiss Valley in Llanelli, has celebrated achieving her PhD in Social Policy from Swansea University. 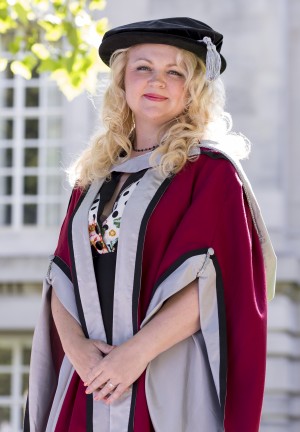 Jodie, aged 39, received her award in July at the Summer Degree and Award Congregation for the College of Human and Health Sciences, at the City and County of Swansea’s Brangwyn Hall, cheered on by her proud parents Allan and Tina, husband Neil and son Adam.

Jodie was studying for her A-levels when she became pregnant at 18 and didn’t have the opportunity to complete them.  But an early interest in social policy led her to return to learning, achieve her PhD through part-time study, and become Programme Director for the BSc Social Policy and BSc Health and Social Care programmes at Swansea University.

After the birth of her son Adam, now 20, Jodie worked for several years as a support worker with a range of vulnerable groups.  She gained experience in a wide variety of health and social care settings including Morriston Hospital Cardiac Unit, Carmarthenshire social services home care, and a number of third sector organisations including Leonard Cheshire Disability, and Community Opportunities Consortium (now Perthyn).

Alongside these roles, she undertook an Access to Social Welfare course at Gorseinon College, now Gower College Swansea, which introduced her to Social Policy.

Jodie particularly liked the way that Social Policy was both an academic subject and an applied field, which helps us to understand how and why societies change, and how policies are put in place to respond to these changes.

She decided to pursue a degree in the subject and began her BSc Social Policy degree at Swansea University’s College of Human and Health Sciences in September 2003, at the age of 27.

Jodie graduated with First Class Honours in 2006 and she was then awarded a scholarship to study for her PhD part-time, which she began in 2007, with a focus on lone parents’ employment opportunities.

But personal experiences changed the course and focus of Jodie’s studies, leading her to revise the topic of her PhD to examine the lack of recognition of the support needs of older bereaved people within UK social policy.

Her interest in this topic was first triggered by what she describes as the lack of support offered to her family following a tragic loss.

Reflecting on this experience, Jodie then cast her mind back to some of the experiences she had through her previous employment as a community support worker.

Many of the older people she had supported had lost a loved one whilst under her care. As far as she could recollect, they hadn’t received, nor had they been offered any support following their loss, in spite of the fact many of them did not have any family to call upon.

“These experiences and thoughts led to a poignant curiosity about the provision of support to older bereaved people,” said Jodie.

“In January 2008, I began considering this as a piece of research, which then eventually became my PhD study, which went on to critically explore the lack of recognition of the support needs of older bereaved individuals within UK social policy.”

Her research found that although bereavement is generally acknowledged as being one of the most traumatic, stressful and life altering events that can occur during a person's life, it is often assumed that older people accept bereavement as an expected, inevitable event, and because of this, it is not thought to adversely affect them.

This assumption has meant that as a society we have not thought it necessary to provide older bereaved people with support, and social policy has afforded little consideration of their needs.

Her study highlighted inadequacies with current provision of support for older bereaved people in the UK and also pointed to some of the implications this may have on older people's lived experiences of bereavement.

Jodie said: “Today, older people are more likely than any other age group to experience the loss of close family members, friends, and neighbours.

“Without support, a growing number of these people may be facing this difficult time without adequate means to enable them to adapt to their post-bereavement life. This could have detrimental implications for their welfare.

“Ultimately, my study argues that UK policy-makers should no longer continue to ignore older bereaved people’s experiences of, and potential needs for support.

“In this time of continued population ageing, the inadequacies of informal and formal supports, and the many and varied needs for support described by the participants in this study, are seen as powerful arguments to urge policy-makers to place bereavement support for older people on UK policy agendas.”

Now that she has successfully completed her PhD, Jodie is hopeful that its findings will lead to some real-life policy changes.

Throughout part-time PhD studies, Jodie has continued to work and held various positions within Swansea University, as a Tutor on the Social Policy programme and taking seminars and workshops before moving on to lecturing.

Jodie held a number of Research Assistant posts within University departments, including the Centre for Social Work and Social Care Research where she worked on a number of projects including 'Integration of social care staff within community mental health teams'.

Following on from this Jodie was a Research Assistant in the Medical School’s Information Research Unit, where she worked on a series of projects funded by the Welsh Government and the Department of Health including the 'All Wales Injury Surveillance System'.

Reflecting on her journey from beginning her Access to HE course, to being awarded her Doctorate, Jodie said: “I remember feeling quite envious of my friends when they went off to University at the age of 18 and believed that I had truly blown any opportunity of doing the same.

“However, my early work experiences and the encouragement by teaching staff at Gower College Swansea gave me a new lease of life and provided me with the confidence to apply for a place at Swansea University at the age of 27.

“I believe that my not so traditional route into academia is a great benefit to my current role. For example, when teaching modules such as Disability Policy, which assesses the impact of contemporary social policies upon disabled people, I combine current debates from academic literature with my first hand experiences of working with disabled people and encourage students to speak about their own experiences of this topic.

“My choice to return to education was the best decision I have ever made and I haven't looked back. I am living proof that it is never too late.”

Congratulating Jodie on her achievement, Professor Ceri J Phillips, Head of College of Human and Health Sciences at Swansea University, said: “Jodie’s journey to today’s destination is one that deserves the utmost admiration.

“She has demonstrated levels of motivation that are inspirational and her experience makes her an ideal role model for other non-conventional entrants to higher education.

“The College is extremely proud of her achievements and looks forward with anticipation to the further development of her career in academia and the influence she will have on future generations of students.”