Hilda Smith, MBE, had close links with the Centre for Innovative Ageing and OPAN (Older People and Ageing Research and Development Network) through her role on the National Partnership Forum for Older People in Wales.

Hilda, a leading UK co-operator and Welsh campaigner for frail older people, died on 27 March, aged 94. She was a strong woman from Burnley, Lancashire, who constantly fought for the things that she believed in and who valued co-operation as a practical form of socialism.

Hilda took it for granted that women had a special contribution to make in politics. In 1990 she received a Shadow Ministry for Women award for “her lifetime, particularly within the Co-operative Movement, fighting for equality for women and for their full representation at all levels of the Labour Movement”. 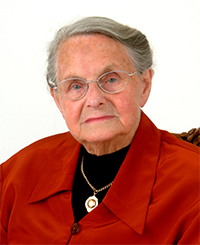 She was active in the consumer, feminist, co-operative, labour and public health movements for over 50 years and she was well respected for her infectious enthusiasm and practical ideas to bring about equality and social justice.

Hilda was very proud to have been a part time student of Arnold Bonner at the Co-operative College and to have been given every opportunity by the Co-operative Womens' Guild. Subsequently, she was a Borough and County Councillor, championed disability issues, attended Hillcroft College, trained as a social worker and worked in the Old Kent Road. She was actively supported in all she did by her late husband Harry Smith.

She was constantly underestimated by the rather stodgy male-dominated set- up in Woolwich. Under her chairmanship, the PPC pioneered popular regular conferences for members, submitted evidence to Government Committees of enquiry and frequently took packed coach loads of Co-operators to Labour Party Conferences

Hilda was skilled in identifying issues requiring action, and initiating conference resolutions and pamphlets at national and regional levels. Members' money was quickly switched from ‘free conference alcohol’ to excellent Co-operative fringe events, as part of a Co-operative education programme.

She first joined the Co-op Party and, subsequently, the Labour Party. Hilda initiated the tradition of a crèche at Labour Party conferences and provided the emerging Industrial Common Ownership Movement with office accommodation. As a peace activist she cooked dinners for Greenham Common campaigners, and made sure the RACS supplied several dozen sets of thermal underwear to keep protesters warm during a bitter winter.

In 1963, much to the annoyance of the RACS Political Secretary, she made sure that Woking Co-op Party could co-exist alongside RACS’s direct affiliation with the Labour Party, which set the pattern for future mergers in South East England.

The powerful National Joint Committee of Working Women (NJC) was important in uniting political, trade union and consumer wings of the Labour Movement. Some of her most important work was undertaken through representing the RACS on the NJC and a plethora of policy sub- committees (1967-1987). For Hilda, this was an excellent channel for transporting feminist and co-operative ideas about women's participation in politics, employment and their domestic life into the Labour Party and Government, with easy access and good working relationships with the Prime Minister and senior ministers.

As an active member of the Welsh Government’s Older Persons Advisory Committee, she made a large contribution to Ageing Policy in Wales focused upon nutrition, medication, food, social care and public health issues. As a former nurse, social worker, Regional and District Health Authority member, Hilda was a force to be reckoned with. Awarded the MBE in the 2013 honours list for ‘services to Vulnerable and Older people’, she was sadly unable to receive it from the Queen.

With masses of experience of public bodies, Hilda Smith always focused upon practical solutions and public participation. She believed that organised people power could make a difference. She lived a remarkable life and her body is being donated for medical research because, following a TB operation, she was told she would be living on borrowed time and lived another 63 years.