A postgraduate research student from the College of Human and Health Sciences has claimed first prize in an interdisciplinary Three Minute Thesis (3MT) competition, held at Swansea University this month (May). 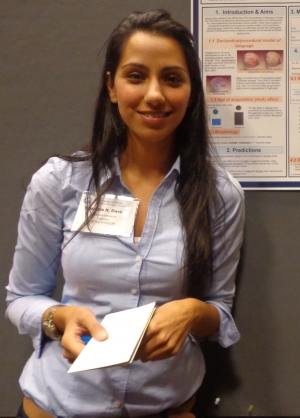 Shakiela Davies (pictured left), who is studying for a PhD in Psychology, won the competition with her presentation entitled “Early World Learning in the Brain”.

Shakiela’s thesis investigates language processing in adult readers, with particular interest in the influence of age acquisition, morphological processing and the role of declarative and procedural memory systems in the neurocognition of language.

Shakiela said: “I have wanted to enter the 3MT thesis competition for a couple of years, however given that I get so nervous when public speaking I have missed significant opportunities to do so. As I am now in my final year of my cognitive psychology/neuroscience doctorate, I knew this was my final opportunity to translate my research and convey how significant it is to me. More importantly, I wanted to highlight its potential impact for normal and clinical populations.

“I have been exploring the way early and late learned words may be represented in our brain (using behavioural and neurological experiments) in normal readers. I would like to extend this research to a clinical population, particularly in patients with Alzheimers and with neurological disorders, and investigate how we can best manage early diagnoses and treatment plans by using language tasks as well as other tools.

“As a researcher it is important to believe in your research and speak to cross-cultural, normal and clinical populations. My goal is to significantly change people lives, however big or small.

“I am delighted to have won; it was very unexpected. I am grateful for the support from Swansea University.”

The Three Minute Thesis competition is a dynamic, creative, research communication competition that challenges doctoral candidates to present a compelling spoken presentation of their research topic and its significance in just three minutes.

Established at the University of Queensland in 2008, the competition has spread rapidly across the world and Swansea University is just one of dozens of UK-based institutions that form part of a global 3MT network.

Third place in the competition went to third year Psychology PhD student Amy Jenkins for her presentation “Should I be concerned about that?”

Shakiela was awarded with a prize of £300 and she will go forward to represent Swansea University at the Vitae 3MT UK semi-finals which take place in July.