Swansea University’s College of Human and Health Sciences has played host to a delegation from Chongqing Medical and Pharmaceutical College (CMPC). 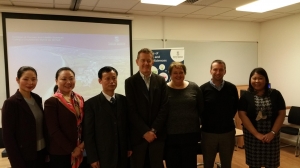 College Vice President, Tang Quan, Associate Professor, Chen Lijian of the College of Nursing and Yang Yuanjuan, Dean of College of Pharmacy visited the College of Human and Health Sciences on 12th January.

Following a tour of Swansea University’s Singleton Campus, the delegation met with Professor Ceri Phillips, Head of the College of Human and Health Sciences, Dr Jayne Cutter, Head of the Department of Nursing and Mr Mark Phillips, Programme Manager for the Professional Nursing Studies Programme.

Professor Phillips said: “The meeting was very productive. Opportunities for nursing students to join the Professional Nursing Studies Programme, leading to registration with the Nursing and Midwifery Council once they had successfully completed a nursing diploma at CMPC, together with  the option of an additional year of study to achieve a masters qualification were discussed.

"In preparation for this, CMPC have designed a specific programme for potential students with an emphasis on academic skills, including English, which should come to fruition in approximately two years. The possibility of students spending two weeks in Swansea to experience the city, culture and education prior to starting the Professional Nursing Studies course was also considered.

"Professor Tang Quan was also interested in potentially setting up a contact for lecturers from CMPC to gain a teaching qualification from The College of Human and Health Sciences. We currently run a PGCert in Education for the Health Professions that has received excellent student feedback and we welcome further discussions on this issue."

A signing ceremony was held in the Haldane Executive Boardroom. During the Signing ceremony, Vice President Tang Quan and Professor Ceri Phillips signed a Declaration of Intent (DoI) Agreement between Chongqing Medical and Pharmaceutical College and Swansea University. An Addendum to the Declaration of Intent between the two institutions was also signed, and counter-signed by Swansea University’s Pro Vice Chancellor, Iwan Davies.

Prefessor Phillips added: "The College was delighted to receive visitors from Chongqing Medical and Pharmaceutical College to discuss potential collaborations. Such ventures provide opportunities for staff and students alike to broaden their respective horizons. The declaration of intent represents the initial stage in what is hoped becomes a fruitful and effective partnership, generating mutual benefits for both institutions."