A team of staff from the College of Human and Health Sciences at Swansea University participated in a 25KM hike to raise money for local charity, Shelter Cymru. 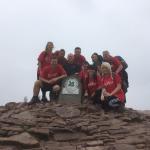 The self-titled 'Human and Health Hikers' tackled the Fan Dance route of the Brecon Beacons, scaling the heights of Corn Ddu and Pen Y Fan, before making their way down Jacobs ladder and Roman Road, which served as a turn-around (and lunch) point.

Taking the route in reverse, the team then climbed back up Pen Y Fan via the dreaded Jacobs ladder, before making their way back down to the starting line.

The Fan Dance route has long been a part of Special Air Service and Special Boat Service selection and is considered the yardstick of a candidates potential to perform well on Test Week and ultimately pass the Special Forces selection programme.

Team member Shelly Hill, who took lead in the organisation said “We wanted to organise an event for Charity which involved getting fit”.

“We decided upon a 25km Trek over the Brecon Beacons to raise money for Shelter Cymru, as we always aim to support local charities through various fundraising activities”.

An overwhelming £1700 (and counting) has been raised for Shelter Cymru, a Swansea based Charity, who provide support and help to homeless people across Wales.

Shelly added: “Although challenging, there was a fantastic atmosphere on the day with a great sense of team spirit, Jacobs ladder being a particular highlight”.

“We intend to continue organising events to raise money for local charities as it really does create a ‘buzz’ within the work place".

The next organised event will be for ‘Hands for downs’ on Saturday 11th June, which involves a charity gig, cake sale and raffle.