A member of the College of Human and Health Sciences teaching staff has been recognised by Swansea University during the University’s graduation week (20-24 July), in the Excellence in Learning and Teaching Awards (ELTAs). 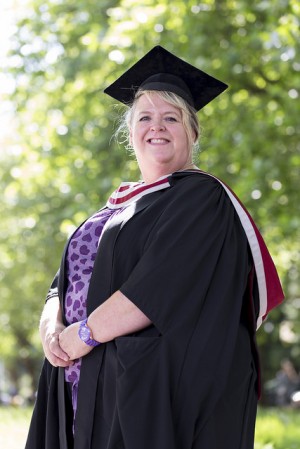 The awards have been developed in conjunction with the Students’ Union to ensure a greater student voice in the award process with staff nominated by their students for their outstanding teaching abilities.

The awards were presented by Swansea University Vice-Chancellor, Professor Richard B Davies.  Professor Davies said: “While we celebrate the success of our students during graduation week, it is important that we also distinguish the staff that have contributed to that success through these awards.

“We are very proud of the quality of our student experience and we find that staff, graduates and parents enjoy the opportunity to recognise the staff that inspire our students both academically and pastorally.”

Mrs Sharon Harvey, Senior Lecturer in the Department of Nursing in the College of Human and Health Sciences received her award during the degree ceremony for the College of Human and Health Sciences on 22 July.  She was nominated for an ELTA for her enthusiasm and in-depth knowledge of her subject.  She was described as ‘outstanding’, with students impressed by her key references to educational resources.