Amy Jenkins, a PhD student from the College of Human and Health Sciences Psychology Department has been awarded the prize of 'Best Young Researcher' at the 2nd International Conference on Alzheimer’s Disease and Dementia in Valencia, Spain. 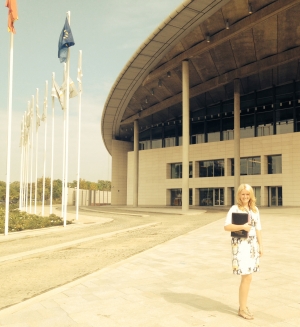 Amy said: "The Alzheimer’s Disease and Dementia conference was over three days in the beautiful city of Valencia. Being accepted to present at an International conference was quite daunting, especially considering I was there to represent the work of our research development group, I wanted to ensure I did it justice for the team. The presentation itself was a great success, the audience were engaged and my nerves were controlled. During the closing ceremony they presented the awards. I was ecstatic when I was called up on the stage to receive the award of ‘Best Young Researcher’ for my presentation. I was so proud to be there representing our research team, and the Swansea University College of Human and Health Sciences."

Andrea Tales, Amy's PhD supervisor said: "This is a wonderful start to Amy's PhD. Amy put a great deal of hard work, independent thought and initiative into the preparation and delivery of her presentation. Congratulations Amy on your award, it is thoroughly deserved."