A determined 30-year-old nursing student from Swansea has been named runner-up in the Outstanding Commitment to Study category at the Agored Cymru Access to Higher Education Learner of the Year Award 2017. 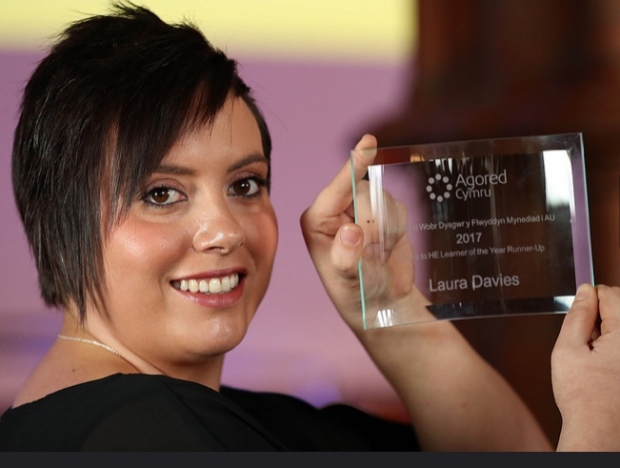 Laura Davies, who studies at Swansea University's College of Human and Health Sciences has her mind set on becoming a nurse and few who know her doubt that she will reach that goal in the near future.

At a special presentation sponsored by Eluned Morgan, Minister for Welsh Language and Lifelong Learning, held at the Pierhead Laura Davies was presented with her Agored Cymru Access to Higher Education Learner of the Year Award.

Agored Cymru Access to Higher Education Diplomas are national qualifications recognised by all universities in Wales as equivalent to three A Levels. The Diploma is specifically designed to provide adults with an opportunity to prepare for and progress to higher education.

The former Olchfa Comprehensive School pupil said: "I did well in my GCSEs but not so great in my A-Levels but then I met my ex-partner and got married and just worked for the next 10 years."

After her son was born three years ago, she found herself working as a carer; something that was to change both their lives.

She says: "In school I didn't particularly think about nursing as a career but when I had my little boy, Joshua, I went into caring. I thought that it would be more convenient, but it wasn't until I started caring that I realised that I had fallen in love with it.

"I fell in love with providing care for people but wasn't able to be as responsible for them as I could be as there were limitations as a carer and I found this frustrating. It seemed a natural progression to go from being a carer to becoming a nurse.

"That's when I looked at going back into education and found out about  the Access to nursing Diploma. I already had A-Levels but because I had been out of education for nearly 10 years, I needed something to get me back into it and help get me into university."

She enrolled onto an AHE Diploma in Health Care at Gower College Swansea but the challenges she faced were far more than returning to education.

She explains: "I have issues with mental health, I'm bipolar, so it was a challenge to have the courage to go for it. I was worried about any shortcomings that I may have, but once I knew that I wouldn't be judged, I decided to do it. "It's something that I didn't want to define me as an individual.

"I was diagnosed around the age of 20 and was quite unwell at the time but it's managed well these days. There's support and I think it's important that people with mental health conditions aren't put off or deterred from going into these professions. I think there's too much stigma attached to it as well."

Her personal life was to throw up another hurdle.

She says: "My marriage came to an end about two weeks before the course started - so it was a bit of a turbulent time - but I think that's what kept me going on the course; I wanted to be able to provide a future for my little boy.

Then, in the middle of the course, she was hit by another body blow.

She says: "Over the Christmas period I received news that I had being diagnosed with skin cancer.

"It was very stressful. I felt isolated and depressed but it was my passion and determination to follow my dream, of becoming a nurse, that made me continue with the course."

Thankfully she was later given the all clear.

Of the challenge of the course itself - she did it part time while raising her son - she says: "The Access course made me realise my potential and what I can achieve. That's why it was such a good opportunity. Saying that, it was probably one of the most challenging things that I have ever done; both academically and emotionally.

"I did it over two evenings a week and there was a lot of independent learning, especially getting back into essay writing. "I'd put the baby to bed at 7pm and I would stay up throughout the night to get assignments finished because you can't just tell your toddler, 'Mammy has work to do'."

Now studying for an Adult Nursing degree in Swansea University she has nothing but praise for Gower College Swansea and her Agored Cymru AHE Diploma.

She says: "Gower College was outstanding. It's such an intense course but the support you get from the college and tutors is incredible. They really are a fantastic team there.

"I see the advantage of being an Access student at university compared to being an A-Level student. It prepares you so much more mentally and academically and enhances your confidence and I have made a really good group of friends already."

And Laura has no hesitation in encouraging others to follow her lead and return to education.

She says: "I recommend it 100%. If I can come through my challenges and obstacles and get 39 distinctions, anyone can do it, as long as you're committed and put your mind to it.

"Just explore your opportunities, explore what is available to you and don't let age be a factor. I thought, 'Oh my goodness, am I too old to go back to education as a 30-year-old but then I have 30 or 40 years left in the NHS. It's never too late; never give up on what you want to do."