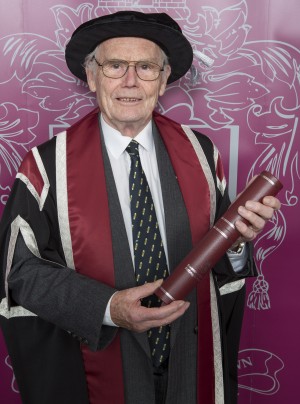 The award was presented to Professor Knight today (23 July 2018) at the University’s degree ceremony for the College of Human and Health Sciences.  Presenting the award was Dr Suzannah Lishman, President of the Royal College of Pathologists, who herself received an honorary degree from Swansea University in 2016.

Born in Cardiff, Bernard Knight moved to Mumbles when he was 15 and attended Dynevor Secondary School.  He was unable to get a place at Cardiff Medical School after A-levels because he was only 17, so he worked as a lab a technician in Cardiff Royal Infirmary and then Bridgend Hospital. The following year he was able to attend medical school, his fees funded by Swansea Education Committee.

He evaded national Service for a year by getting the first ever pathology Senior House Officer (SHO) post in Cardiff but the army caught up with him and he signed up as a regular officer. He became a Captain and a junior specialist in pathology on the strength of 12 months as an SHO. Having recently married he requested a placement in the UK, but was sent to Malaya for three years, where he ran a lab in a military hospital.

On returning to the UK in 1959, he looked for a job in forensic medicine, having set his heart on this specialty as a medical student. He was appointed at The London Hospital, where for three years he drove round the local public mortuaries performing a thousand coroners post mortems a year before moving to Newcastle and finally settling in Cardiff. He also read for the Bar at Gray’s Inn.

Professor Knight held the chair of Forensic Pathology in Cardiff until he retired in 1996. His main research interests were sudden infant death syndrome, the dating of skeletal remains and the estimation of the time since death.

Professor Knight’s career as an author developed in parallel with his medical role. He started writing to pass the time during his posting in Malaya - having read all the crime novels in the camp library he thought the forensic aspects were so wildly inaccurate that he could do better himself.

Bernard Knight published his first crime novel in 1963 and has since written over 30 books.  He is perhaps best known for the Crowner John series of historical mysteries set in the 12th century, featuring the first fictional coroner. He has also written for television and radio.

On receiving his award, Professor Knight said: “Although a number of academic honours have come my way over the years, none were more acceptable than one from Swansea University, as although I was born in Cardiff, I came as a teenager to Mumbles, attended Dynevor Secondary School, worked on a farm in Gower and as a laboratory technician in  Morriston Hospital and as a house-physician in Swansea General Hospital - and married a lady from Plasmarl in St James' Church in the Uplands!

Having won a major scholarship from Dynevor, I owe my whole career to Swansea Education Committee for supporting me for the five years of medical training and I am eternally grateful to the city."