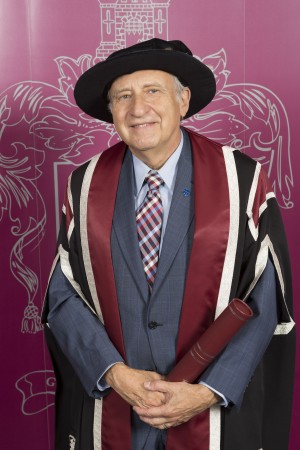 Swansea University has awarded an honorary degree to Professor Ben Shneiderman, a pioneering computer scientist whose work has been vital in determining the essential ways we communicate with computers through for example, the use of a mouse to point and click.

Professor Shneiderman has been instrumental in a field of work called “universal usability” which ensures that whatever a user’s physical, cognitive or motor abilities, they can have effective and satisfying access to digital services.

He is the Founding Director of the Human-Computer Interaction Laboratory at the University of Maryland and has been visiting and encouraging computer scientists at Swansea for many years, especially recently, in light of the opening of the £31m Computational Foundry on the Bay Campus, which will be a global beacon for future transformational science.

Professor Shneiderman has written some of the most read books in human computer interaction including, in 2002, the acclaimed “Leonardo’s Laptop” that considered how human needs can be met with new computing technologies.

His contributions to computer science have been recognised through awards including the ACM SIGCHI Lifetime Achievement Award in 2001 and the IEEE Visualization Career Award in 2012.

On receiving his award, Professor Shneiderman said: “The growing prominence of Swansea University and its soon-to-be-opened Computational Foundry signal its entry into the top rank of universities. In this context, it is especially satisfying to receive this honorary doctorate for my work in human-computer interaction and information visualization, which is well-aligned with research directions at the University.”