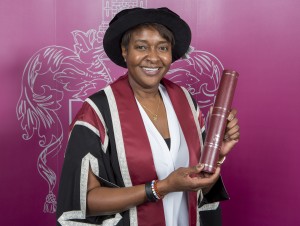 The award was presented to Ms Lindsay today (26 July 2018) at the University’s degree ceremony for the College of Engineering.

La-Chun was born in South Carolina and obtained her BSc in Ceramic Engineering from Clemson University in 1995 before joining the SELEE Corporation in North Carolina.

At SELEE, she held a variety of roles including leading their largest production line.  In 1997, La-Chun moved to GE Quartz, taking up the position of plant manager for three years.  Over a period of seven years, she progressed from associate to audit manager, senior audit manager and finally executive audit manager.

In 2007, she moved to GE Capital, taking up the role of Vice President of Commercial Distribution finance’s field services group.  She remained in this position for almost seven years before progressing, once she had joined GE Aviation, to Plant Leader of Lynn Assembly, Test and Overhaul.  In this role, La-Chun was responsible for leading a team of 400 employees in producing and developing engines for GE Aviation’s military and commercial customers.  Just over a year later, she moved to GE Aviation Wales.

Since arriving in Wales, two and a half years ago, she has had an enormous impact, not only within GE Aviation Wales, but more broadly across a number of communities in Wales.  Specifically, La-Chun has been an active supporter and advocate for the LGBT community in Wales, and was recently ranked number four in the Wales Online ‘Pinc List 2016: The 40 most influential LGBT people in Wales’.

La-Chun has significantly diversified the workforce at GE Aviation Wales and in recognition of her impact there, she is regularly approached to speak at corporate events, university celebrations, dinners, and to comment for the media.

In 2017, La-Chun was the keynote speaker at Swansea University for the Women in Engineering day celebrations.

In addition to her support of women in STEM, La-Chun’s engagement in the LGBT community is helping to further support and inspire staff and students across the University and she provided the keynote speech at the Stonewall Cymru workplace conference in 2017, which was attended by Swansea University equality team members, and also the national Stonewall Workplace conference.  Most recently, La-Chun and GE Aviation were active participants in Pride Cymru this year.

Speaking on receiving her award, Ms Lindsay said: “I am extremely honoured and humbled to receive this prestigious recognition from Swansea University, a world-class university built on an outstanding foundation of history, heritage and values.  I had the privilege of living in Wales from 2015-2018 while leading GE Aviation Wales, the largest industrial company in Wales with nearly $3B in annual revenues. During my tenure, the site had many achievements of which I was extremely proud; however, I will always be the proudest of this accolade. Diolch."