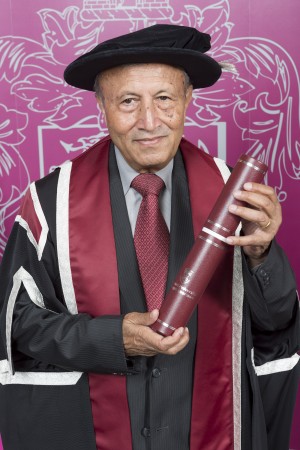 Swansea University has awarded an honorary degree to an outstanding member of its alumni community, Honourable Shekhar Dutt SM.

The award was presented to Mr Dutt today (25 July 2018) at the University’s degree ceremony for the School of Management.

Mr Shekhar Dutt started his working life as an army officer in 1967, and whilst in the Indian army he participated in the 1971 Indo-Pak War in the Western (Singh Rajathan) Sector and was awarded the Sena Medal for gallantry.

He graduated from what was then the University College of Swansea, Wales in 1984 with a postgraduate diploma in Development Policy and Planning from the Centre for Development Studies.  It was a qualification that served him well during the next stages of his career, when, in 1985 he became Commissioner, Raipur Division, in the state of Madhya Pradesh, and, simultaneously, Chairman of the Mahanadi Command Area Development Authority.  The tenure allowed him to plan and execute an all-round development of the territory that is now Chattisgarh State.

As Principal Secretary of Tribal Welfare, a post he held between 1998 and 2001, he was instrumental in drawing up a number of schemes including special projects concerning area development, the collection and marketing of minor forest produce and forest village development.

In his capacity as Principal Secretary in the Departments of School Education, Sports and Youth Welfare between 1997 and 1998, he was credited with the introduction of an innovative programme, the ‘Education Guarantee Scheme’ in which community panchayats or village councils, owned and ran schools.  He also developed a system whereby primary school teachers could be posted to schools in remote places, thus spreading the availability of elementary education throughout Madhya Pradesh.

Shekhar Dutt became Defence Secretary for the Government of India in 2005, a post he retained until July 2007.  During this tenure, he introduced a number of initiatives for modernisation and was responsible for developing a new Defence Procurement Policy.   It was during this period that a new framework for the US-India defence relationship was realised and institutional mechanisms for an Indo-US dialogue was set up, paving the way for increased co-operation between India and the US in defence and strategic matters.

Shekhar Dutt served on the Board of Governors of DeSales University in the US from 2008 to 2010.  As the Governor of Chattisgarh, he has been Chancellor of 11 state universities aligning with his keen interest in the field of higher education and promoting scientific and intellectual thinking amongst the youth and teaching communities.

Shekhar Dutt has chronicled his experiences in two books: Reflections on Contemporary India and India’s Defence and National Security.

On receiving his award, Mr Shekhar Dutt said: “I feel immensely honoured by the decision of Swansea University to give me this Honorary Award.

To my amazement, I found that I am still in possession of the books that I had purchased whilst at Swansea. I remember Professor Mike Shephardson’s advice to me - to read: “Development and Underdevelopment in Historical Perspective” by Gavin Kitching who also taught at Swansea University.

Professor Shephardson and others at Swansea opened a door through which I could see the causes of poverty in developing countries and the possible theories by which national policies could be evolved for ameliorating them.   What I learnt at Swansea has influenced my thinking and helped me tackle problems and find solutions.

I would be extremely happy to give my time towards any work which will be helpful to Swansea University to attain its objectives.”