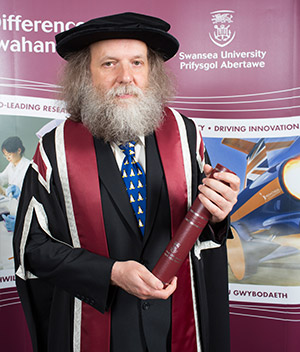 Swansea University has awarded an honorary degree to world class computer programmer Alan Cox, who rewrote the networking software for a version of the Linux operating system which is used by computers to manage NASA’s international space station; CERN’s Large Hadron Collider; Amazon and eBay.

Mr Cox was presented with the award today (Wednesday 20 July) at Swansea University during the graduation ceremony for the College of Science.

Alan started working on Version 0. There were bugs and problems he could correct. He put Linux on a machine in the Swansea University computer network, which revealed many problems in networking which he sorted out; later he rewrote the networking software. Alan brought to Linux software engineering discipline: Linux software releases that were tested, corrected and above all stable. On graduating, Alan worked at Swansea University, set up the UK Linux server and distributed thousands of systems.

Alan was the main developer and maintainer of the whole Linux kernel. He was responsible for the Version 2.2 branch, and made many special contributions (such as his own versions of the 2.4). Alan’s branch was very stable and led to the adoption of Linux in enterprises.

Linux has also been a profound influence on software engineering itself – not unlike the old IBM 360 itself – as it is a spectacular example of open source software development.

Presenting the award to Mr Cox was Professor John Tucker of Swansea University’s Computer Science Department.  He said: “Alan Cox is a world class programmer, an articulate champion of open source software development, and one of the UK’s top software gurus.

“He has made a huge contribution to computing, especially where it matters most, in operating systems upon which everything rests, and in developing a radical new technological model - that of open source.”

On receiving his award, Alan Cox said: “I am delighted to be recognised by the University in this way. The University and its support for the University computer society were of great importance to the early work on the Linux operating system done in Swansea"