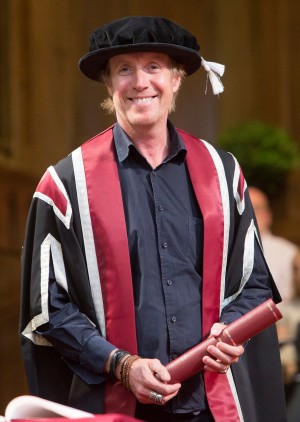 ‌Rhys Ifans is a prolific Welsh actor who has starred in iconic films including the Swansea-based film Twin Town.  He has played such diverse characters as Dr Curt Connors/The Lizard in The Amazing Spider-Man, and Spike, Hugh Grant’s slovenly roommate in Notting Hill.

In 2005, Ifans won a BAFTA for his portrayal of comedian Peter Cook in the TV film Not Only but Always.  He is an accomplished stage actor and has appeared in productions including Under Milk Wood and Volpone at the Royal National Theatre.

Presenting the award, Sir Roger Jones OBE, Swansea University Pro-Chancellor and Chair of Council, said: “Through his compelling portrayal of characters, Rhys Ifans has shown himself to be an accomplished and meticulous method actor, one who consistently eschews stereotyping through the acceptance of challenging and diverse roles.  This makes him one of the finest actors that Wales has produced.“

On receiving his award, Mr Ifans said: “It is a great honour to accept this award.Having one's work acknowledged is always a lovely thing, and having it recognised by such a prestigious university in a city that I have great affection for means the world to me...Diolch yn fawr iawn.”