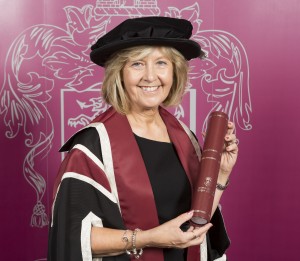 The award was presented to Mrs Richards today (27 July 2018) at the University’s degree ceremony for the College of Science.

Gaynor Richards has been the Director of Neath Port Talbot CVS (Council for Voluntary Service) for more than 20 years, since its inception in 1997.  The Council plays a major role in supporting, promoting and developing the participation of voluntary organisations, community groups and individuals in the voluntary sector in the county of Neath Port Talbot.

As Director of NPTCVC, Gaynor plays an instrumental role in supporting and working with the University on many of its volunteering projects.  In addition to offering work experience placements for students, NPTCVC works closely with Discovery, the student volunteering service, based at Swansea University’s Singleton campus, and she supports the volunteering required for the University’s Swansea Employability Award.

Working closely with NPTCVC the University is able to facilitate the recruitment and training of volunteers, especially those working with vulnerable children, young people, adults and families.

Gaynor also works in partnership with the University alongside other organisations including Age Cymru, Abertawe Bro-Morgannwg University Health Board, Swansea Council for Voluntary Service and other regional CVSs.

In October 2009, Gaynor was appointed as Third Sector Non Officer Member to Abertawe Bro Morgannwg University Local Health Board and she is the Children and Young People’s Champion as well as the Welsh Language Champion for the Board.  She is Chair of the Governors of NPTC Group, overseeing the merger between NPTC (Neath Port Talbot College and Coleg Powys) servicing more than 270,000 residents across communities from South to North Wales.

She has previously been a member of the Welsh Assembly Government’s Social Enterprise Joint Working Group and is a board member of Ystalyfera Health and Wellbeing Centre and the Ioan Davies Community Group.  She is a committee member of the Big Lottery Fund.

For her outstanding services to the Voluntary/Community sector, Gaynor was awarded an MBE in 2008.

She was awarded the considerable honour of being the high Sheriff of West Glamorgan for 2013/2014.

On receiving her award, Gaynor said: “I am extremely honoured and humbled to receive this award from one of Wales’s foremost institutions.  I am proud to be connected with Swansea University – a university of such inspirational ambition which I have watched grow in scale and standing in recent years.  I look forward to continuing close contact with the University in the future.”