The prohibition dominated approach to non-medical and non-scientific use of certain psychoactive substances is a long-standing feature of international drug policy, but the trade in drugs online is a relatively new feature.  Historic interventions by state and international law enforcement agencies against online drug transactions on the clearnet, combined with the increasingly de-anonymised nature of the internet in general, have driven the online drug trade underground, into cryptographically obscured spaces on the darknet. The growing trade in narcotics being sold over Crypto-Drug Markets (CDMs) is causing academics, law enforcement and policy makers to reassess the impact of ICT technology on drug policy enforcment.  The CDM project page aims to provide a useful resource for those attempting to understand the complicated nexus of drug policy and the internet.

Despite recent increases in Russian and Chinese markets and vendors, much analysis of Drug Cryptomarket (DCM) policy and enforcement operations has been largely focused on English language markets either located in, or serving, buyers in North West Europe, North America, and Australasia. However, the Republic of Korea (ROK) has been quietly developing – in conjunction with domestic academic and corporate partners – highly sophisticated counter-crypto capabilities. By March 2020, ROK technologies were so advanced that Seoul-based S2W Lab were invited to enter a technology-for-data partnership with Interpol. The year-long arrangement formalised mass data sharing between the ostensibly private organisation and international law enforcement. How – and why – the Republic of Korea has moved so far forward in counter-crypto enforcement capabilities is worthy of attention. 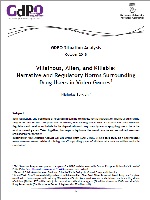 Between June and July 2017, two law enforcement actions targeted the cryptomarkets AlphaBay and Hansa Market, closed them, and arrested their operators, seizing millions of dollars in assets in the process. These operations, dubbed ‘Operation Bayonet’ (AlphaBay) and ‘Operation GraveSac’ (Hansa) saw a shift in the strategy and tactics that law enforcement agencies are using to target cryptomarket activity on the Tor network.4 By deconstructing the operation, this situational analysis aims to provide pertinent lessons on how law enforcement agencies have adapted their approach towards tackling cryptomarkets.

Hard Interventions and Innovation in Crypto-Drug Markets: The escrow example

This policy brief uses empirical study to test the hypothesis that so-called ‘hard’ law enforcement operations (i.e. site takedowns) are a significant cause for innovation of dark net drug market technologies. Comparative analysis of mass data crawled from Silk Road and Silk Road 2.0 appears to corroborate the idea that law enforcement takedowns play a catalytic role in innovation of market technologies.  It therefore raises questions over the long-term efficacy of ‘hard’ law enforcement strategies on the dark net, if those actions are intended to curb usage of CDM for drug transactions. The research highlights the potentially counterproductive nature of takedowns in particular. Policy practitioners may therefore ask a recurring question; just as in traditional drug markets, do short-term results, necessarily mean long term successes?

Until now, the Crypto-Drug Market (CDM) escrow process has been described according to a historic centralised escrow system.  However, centralised escrow is fast becoming obsolete, with four of the five most popular current CDMs now offering a form of decentralised escrow, known as multisignature (multisig). Multisig is therefore rapidly becoming the industry standard for ameliorating financial risk in CDM transactions. This Situation Analysis is intended to clarify the multisig process. It presents an analysis of the background to the shift toward decentralisation, a description of the new process, and a diagrammatic representation of the multisig escrow model.

Corpus Linguistics Methodology on the Silk Road(s): The Escrow Example

Subject: The application of Corpus Linguistics to the concept of innovation in crypto-drug markets.  This analysis shows the application of Corpus Linguistics methodology and of CADS (Corpus Assisted Discourse Studies) approach to data extracted from Crypto-Drug Market (CDM) communities. The aim is twofold: First, to demonstrate how the analysis of textual data created by CDM users can help pin-point  the impact that ‘real-life’ events (in this case, the FBI’s seizure and closure of Silk Road, and the theft of a substantial amount of Bitcoin on Silk Road 2) have on online crypto-communities.  Second, to illustrate how linguistics theories and methodologies may be used to investigate how ‘trust’ is established/reinforced in online CDM communities.

The growing trade in narcotics being sold over the Tor Dark Net is causing academics, law enforcement and policy makers to reassess the impact of ICT technology on real-world crime. Despite growing media attention there are many misconceptions about the difficulty involved and technical knowledge required to participate in these markets and successfully make a sale or purchase. This Situation Analysis aims to explain some of the common practices that vendors and customers alike undertake in order to conduct a secure purchase or sale.

Read full analysis here: From Dealer to Doorstep – How Drugs Are Sold On the Dark Net

The Booming Market of Alternative Cryptocurrencies

Since its creation in 2009, Bitcoin1 has risen to be the first and most popular cryptocurrency in the world and has led to the development of many other alternative cryptocurrencies (or Altcoins) looking to stake their claim in a new and fast-moving financial market. It has also been the most popular currency of choice for users of Dark Net markets due to its semianonymous qualities, lack of regulation and effectiveness in laundering the profits made from the sales of contraband online. However, Bitcoin has been criticised by users of the Dark Net as lacking genuine anonymity and providing a trail of evidence for law enforcement to trace payments via its blockchain. This has led to an increase in the development of alternative cryptocurrencies (Altcoins) in which anonymity and security is prioritised in order to make the tracing of payments and laundering of proceeds almost impossible.

‌On the 6th of November 2014 the FBI and Europol working with other international law enforcement agencies declared that they had succeeded in a joint operation against several hidden services on the Tor Dark Net. The investigation, dubbed ‘Operation Onymous’ saw the successful closure of 267 ‘.onion’ webpages making up 27 separate sites. Law enforcement agencies also made 17 arrests and seizures of $1 million in Bitcoin as well as assorted amounts of cash, drugs, weapons and computers.

The Growing Industry of Darknet Marketing

Tor’s hidden services have allowed a new form of low-risk high-profit drug dealing to emerge and grow quickly over the last four years. Vendors of narcotics are utilising innovative marketing techniques that mirror those used by legal, ‘real-world’ and web-based businesses to promote and sell goods and services. These range from offers of free samples and discounts, to the use of banner adverts and brand management. Drug marketing is becoming increasingly sophisticated as more users and buyers flock to the Tor network and as hidden markets become more diversified and competitive.

A year since the closure of Silk Road: Snapshot of evolved Dark Net drug markets

Over the year since the original Silk Road Marketplace closed as a result of law enforcement activity, the ‘hidden’ marketplaces operating over the Tor Network have fragmented and overcome a loss of trust due to scams, hacking attempts and interdiction operations. Dark Net markets are enjoying renewed growth, spurred by enhanced security features and information exchanges that make it easier for new users to participate, and which have renewed consumer and seller confidence in hidden market transactions.

Read the full analysis here:  A year since the closure of Silk Road Snapshot of evolved Dark Net drug markets

Silk Road: After being closed twice, can the brand ever ‘rise again?’

Since 2011 the Silk Road marketplace has been known as the flagship brand of Dark Net markets. For a long time it was the cornerstone of illicit trade over the Dark Net, despite being shut down by the FBI in October 2013 its successor Silk Road 2.0 was created in a month and quickly outgrew its predecessor. On November 6th 2014, the Silk Road 2.0 was closed in an international law enforcement operation dubbed ‘Operation Onymous’1 . Despite being taken down twice by law enforcement, the Silk Road was both a pathfinder and a trend-setter in the world of Dark Net markets. As a brand it will never be forgotten and may possibly continue to rise repeatedly as a hidden service on the Tor network, however as a marketplace the damage done by two busts may have finally put an end to its viability as a popular destination for those looking to engage in illicit trade.

Read the full analysis here: Silk Road After being closed twice, can the brand ever ‘rise again’