The research and development of silicon CMOS based Lab-On-A-Chip (LOAC) technology platforms that can be developed with future innovations leading to new tools and thereby better understanding of the immunological response that underpins many disease states including allergy, diabetes and cancer.

The use of modern semiconductor techniques to provide transparent substrates proving the ability for in-situ advanced biological experimentation of single cells.

The work on the modelling, fabrication and testing of the organic/inorganic microelectronic devices, such as Al/DNA/Si Schottky diodes. Controlling optical and electronic properties of the metal-inorganic semiconductor structures by introducing DNA interface layers can be vital for novel electronic devices for biotechnology applications.

This research area is led jointly by Dr Paul Holland and Dr Petar Igic who collaborate with Dr Cathy Thornton and Dr Shareen Doak from Swansea University’s College of Medicine and from the Multidisciplinary Nanotechnology Centre.

As a device material for the future microelectronics devices, there are many advantages for using Deoxyribonucleic acid (DNA) such as its wide accessibility, ability to control its size and self-assembly. Controlling optical and electronic properties of the metal-inorganic semiconductor structures by introducing DNA interface layers can be vital for novel electronic devices for biotechnology applications. However, devices employing organic molecules have just started to satisfy their initial expectations, mainly due to organic materials’ instability, uncontrolled variation in purity and composition. DNA molecules are described as a double-stranded negatively charged polymer. These negatively-charged molecules can modify the interface electronic states of metal/silicon semiconductor structures. It has been shown that DNA can resist thermal degradation to greater than 200°C which is a compatible temperature range with silicon semiconductor device applications. Controlling the barrier height of metal/silicon interfaces by the introduction of DNA molecules could result in reduced energy loss during conduction and lead to more efficient power semiconductor devices.

Figure 1. Finished structure of the Si-DNA device showing the etched wells to contain the DNA and the split back contact to enable testing for post-anneal linearity of the I-V trace. 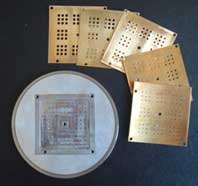 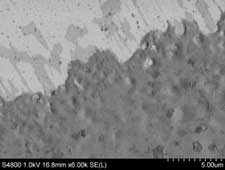 Figure 3. SEM image of the edge of a 1µL droplet of 1mg/ml concentration DNA solution after evaporation from silicon surface.

Find out more about