The Mary Rose sank off Portsmouth - in full view of Henry VIII - during a naval battle with the French. The wreck was famously raised from the seabed in 1982.

The University has been working closely with the Mary Rose Trust for many years, examining remains of the sailors and the artefacts on board, shedding new light on the lives of a Tudor naval crew.

One extraordinary discovery made recently, based on Swansea research, was that the ship’s crew included sailors of African, Mediterranean and Middle Eastern origin.  It shows that the men making up the English navy were far more diverse than had previously been thought.

Dr Owen and team established that photogrammetry – a method of producing high definition, photorealistic 3-D images  – was a very promising method for visually analysing skulls. This allowed osteologists – bone specialists - to test how effective digital remains were for analysing skeletons to establish sex and ancestry or identify diseases that the individual suffered from, like rickets and scurvy.

During the analysis of the photogrammetry models, Dr Owen and team, working with Oxford Archaeological Ltd,  carried out a detailed study of ten skulls of Mary Rose crew members, chosen at random. It was during this work that one of the skulls, Henry's, was identified as being of African origin.

Dr Nick Owen, of Swansea University College of Engineering, who has led the University’s work on the Mary Rose, said:

“I have carried out research with the Mary Rose Trust for almost 10 years. It has been brilliant, and never fails to throw up the unexpected, shedding more light onto the amazing lives of Tudor seamen.”

There is currently an exhibition hosted at Swansea’s stunning Glynn Vivian Gallery, which is free of charge, called Mary Rose: People and Purpose.   It opened on 19 July, 474 years to the day since the ship sank and is staged in partnership with Swansea University and the Mary Rose Trust.

The exhibit includes a 6ft 6in longbow that probably belonged to an elite archer on board.  There is also an arrow chest with ten original arrows and personal items such as a jacket that would have been worn by one of the hundreds of sailors who died when the ship went down.

As well as original items from the ship, the exhibition includes a crystal skull which is an exact replica of the skull of the captain of the archers.

The skull and other items relating to research were 3D printed by experts at Swansea University College of Engineering. Images of Tudor longbow wood being studied by specialists at the university will also be on display. 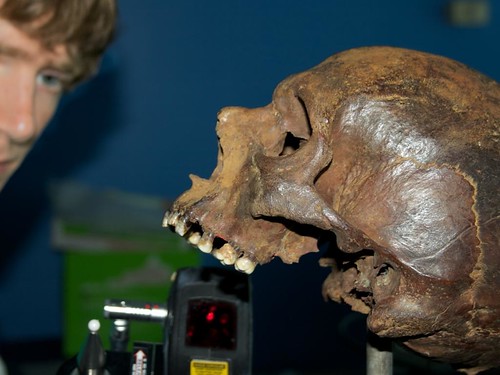