Each year we organise an international summer expedition.

Over the last 4 years we have completed various projects in Zambia. You can read about each of our projects below.

Want to get involved? Email engineering@swansea.ac.uk

This year’s trip combined an interesting mix of undergraduate, MSc, PhD students and members of staff, with a total of 19 expeditioners making this our largest ever group! We began in Lulamba, Chingola where we started building the foundations for a large chicken coup at Mutende Children’s Village. We also completed some basic maintenance and repairs on the children’s playground that we built the previous year. This first several days is always a great bonding experience for the team, getting to know each other and sharing cooking and cleaning responsibilities.

Following this we headed to Siavonga in the South of Zambia which is more rural than Chingola, with few amenities. We met with Siavonga Primary School to find out more about their plans to erect a fence around the perimeter of the school. The MSc Sustainable Engineering Management for International Development students interviewed various members of staff to find out about the wider impacts of building a fence, and how this will affect the community. The undergraduate students measured the perimeter of the school and began painting fence posts. They also worked in groups to come up with alternative solutions to some problems that would be caused by building a fence, and presented their ideas back to the school.

After all of the hard work completed in the North and South of Zambia, the group headed to Livingstone for the final few days to enjoy a safari, the incredible Victoria Falls and a sunset boat cruise. A lot of travelling, an unforgettable experience and emersion in the Zambian culture.

We look forward to what next year’s trip will bring!

Thank you 2018 expeditioners, you were awesome.

This was the largest group the College has ever taken to Zambia, with 11 students and 6 members of staff. This also meant hiring two sizeable minibuses and a pick-up truck to transport all luggage, people and equipment between destinations. The trip began with a long drive to the North to stay in Chingola at the Mutende Children's Village. Excellent work has been completed here in the past so the team had high hopes for this year's project; building a children's playground!

Various components of the playground were designed by the students on CAD before leaving Swansea. Some major features of the playground included a swing set, ladder, fireman's pole, bridge, climbing wall and castle turret. The team also had to carefully remove the original wooden structure which was still in place and had been destoyed by termites. The team worked tirelessly over 4 days to complete the project on time, much to the delight of the children who live at Mutende Children's Village.

Following a successful time spent in Chingola, the team embarked on a long drive down to the Southern town of Siavonga which was much hotter and more humid than the North of the country. Here the group split into two different groups. One group headed to Siavonga Hospital to repair several pieces of equipment, including an operating theatre table, a operating light, several wheelchairs and an oxygen tank. This made a huge difference to the hospital; previously they had only been able to use one small operating room due to the various damaged equipment but after our help they had two fully functioning operating theatres and several working wheelchairs.

The other group proceeded to Siavonga Primary School to complete Surveying work in preparation for a new classroom which is to hopefully be built during next year's trip. After a few days of hard work the students also delivered some educational sessions to the children at the Primary School; this year the children created their very own rocket cars with Carbon Dioxide cannisters to launch them!

Following 2 weeks of dedication, team-work and long days, the group headed to Livingstone to view the magnificent Victoria Falls and spend a couple of days relaxing and meeting some of the Zambian wildlife during a walking safari.

This was an unforgettable trip which we hope to build on next year, joining our annual Zambia expedition with an MSc group of students from our new Master's in Sustainable Engineering Management for International Development. Together we hope to continue building relationships in Zambia and completing projects to help local communities.

The team headed to Chingola to build a solar-powered classroom.

This meant preparing holes for 8 upright steel c-posts, polishing metal and preparing a timber roof with 12 amorphouse silicon solar cells attached to it.

Across the roof were rafters which had steel sheets attached to them for weatherproofing and PV support. The PV panels themselves are held to the roof via adhersive and screws. 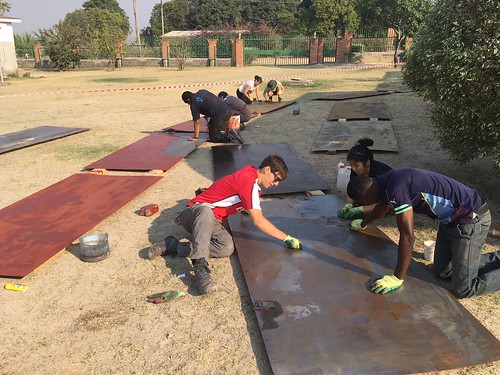 The team head to Mutende in Chingola again via Lulamba. The team began building for both the photovoltaic cells that SPECIFIC want to install and for the new facia boards. Also on the list of things to do was to plumb in a sink and toilet into the security hut built last year, a wooden frame wall was also planned and was marked out to surround the new bathroom to be built.

In total the 3 main projects were: the kitchen refurb, the guard house and replacing the facia boards on the ABC house.

On arrival the team split into two groups and focused on projects at two different locations. The first team led by Dr James Holness, the Director of International Collaboration for Swansea University’s College of Engineering, went to Siavonga where they undertook site surveys, construction feasibility studies and water quality sampling with a view to improving and expanding the buildings, facilities and utilities. This work was done in collaboration with the Swansea University Discovery Charity’s Siavonga Partnership.

The second team was led by Dr Ben Evans, Associate Professor in Aerospace Engineering. Dr Evans's team went straight to Mutende where they completed construction of both a prototype water purification system and a security building. Our Sport and Exercise Science students engaged with the children at the orphanage providing sports and recreational training and activities. Dr Holness's team arrived in Mutende a couple of days later and continued to help with the build.

Together both teams offered a variety of skills and experience, comprising of three female and four male students studying Civil Engineering, Chemical Engineering, Aerospace Engineering and Sport and Exercise Science with support from two technical staff who are specialists in concrete and machining.

It was a fantastic opportunity for Swansea Engineering staff and students to give something back to the global community, by donating their time and expertise to two very worthwhile organisations.