Tech Dependency - will it damage teamwork in the engineering workplace? 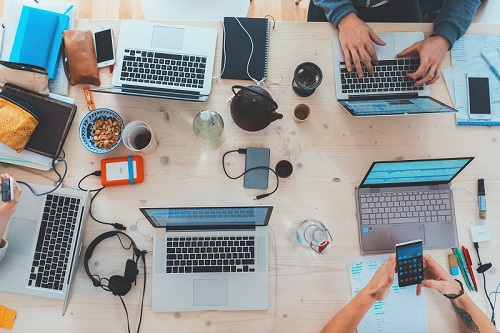 Most workplaces come down to teamwork - but possibly none more so than engineering. Poor communication can hinder, permanently damage, or even kill seriously large projects; two software engineers both individually deciding on different file-naming-schemes leading to incompatibilities, or a mechanical engineer wasting precious hours working on a part only to discover it’s already been done. A 2015 study by Michael Housman and Dylan Minor, published in the Harvard Business School, suggested that hiring one highly productive yet inconsiderate and isolated employee is more damaging to the bottom line than hiring multiple, less talented individuals, who can cooperate. Communication might just equal skill when it comes to professions such as engineering. As such, upon seeing studies suggesting that people now check their phones an average of once every 12 minutes, and spend a 1/7 days a week using their devices, a slight concern rears its visage. In a world where face-to-face communication is almost always interrupted, assisted, or otherwise changed by the appearance of a phone in one’s hand, how can new engineers entering the workplace even hope to thrive? The answer is perhaps more complex than one may think.

Communication, not just as a concept, but as a pragmatic act, is, and has been, in flux for a good few years now. The sudden emergence of smartphones dilutes an already complex pool of communication methods, only for it to be diluted further with software innovations. The average modern workplace is optimised around three major communication paradigms - the formal meeting, the informal/team meeting, and the email. Now add in dozens of separate platforms with their advantages and disadvantages, most of which are completely free, all of which could be made and moderated by anybody in the workforce, and you may be able to see where the confusion starts to come in - it seems like an uncontrollable mess.

However, this paradigm of thought starts to fall away once you look at what’s included in those options. The difference between a meeting, and say, a Slack channel, is twofold - it comes down to scheduling, and to modularity.

Consider this event - a fairly standard meeting - an email is sent out to everyone invited, with a room number and a time. First, every attendee is expected to see what they have in that timeslot, and to move it somewhere else. This will, quite probably, involve the contacting of whoever else is involved in the previously allocated event, and ask them to move it somewhere else too. After a few minutes of wrangling and time-wasting on behalf of everyone involved, the meeting is arranged. A few days later, and we’re onto the meeting itself - all attendees arrive, ready to sit and listen to people speak. A topic is discussed by the group, a conclusion decided, and the next topic started. This process continues down the itinerary until every topic has been discussed, and everybody leaves.

In general, it’s done this way because that’s how it always had to be done. If you want a wide variety of people discussing a wide variety of problems, sit them down in a room at the same time, sort the problems into a list, and go through them. You couldn’t have everyone showing up at random times, discussing random problems - it’d be chaos, and nothing would get done.

Change the limits of the problem to include the scope of digital platforms, and a different solution is found. On newer workspace platforms such as Slack or Discord, you can simply arrange topics into channels. A typical room may have a set of channels for each project, one for hardware, one for software, one for marketing, etc. These channels can be accessed at any time by anyone given permission to use them. This system cannot be replicated outside of the digital realm - here, conversations can be switched between at will, and can last days, as every message is stored indefinitely. These communication methods are new, and can conflict almost directly with workplace norms, but one thing they certainly don’t do is damage communication effectiveness. In fact, they can enhance it. With this system, you can have everyone showing up at random times, discussing random problems - with full moderation, organisation, and documentation.

This doesn’t mean problems don’t exist - the integration of these systems can lead to an overwhelming number of platforms to micromanage - emails and meetings are hard enough without checking and keeping track of hundreds of messages a day, spread across dozens of channels. There is always a point of diminishing returns. One trick to push this point further away is through moderation and modularity. Instead of a hardware channel, have a group of hardware channels, one for each set of components, and allow only those involved in those components to use the channels.

There’s very little reason to think the generation entering the workforce in the next few years will communicate worse than those who came before - however, as one of them, I think it’s reasonable to expect they will communicate somewhat differently.
Juggling conversations, projects, and topics will potentially override the traditional itinerary - it’s just what they’re used to. The use of smartphones in conversation will likely become more common - this doesn’t mean traditional conversation is dead, or even reduced in potency, only that hybridisation and parallelisation of communication may be something worth getting used to.

The deal here goes two ways - it’s not only on young people to adapt to the workplace, but it’s on the workplace to adapt to a new generation. Follow their ways, and the efficiency of communication in the engineering workplace may not drop, but instead shoot up.

Like what you see? Visit Zev's Blog page to support his work.