'My Favourite Places and Spaces'

As part of this year’s International Dylan Thomas Day, which is celebrated on 14 May each year, DylanED invited primary schools across South Wales to take part in a very special competition.

The competition, which was titled ‘My Favourite Places and Spaces’ was based around Reminiscences of Childhood - Dylan Thomas’ classic recollection of the sights and sounds of his childhood.

Following in the footsteps of Swansea’s foremost writer and storyteller, the competition asked pupils aged 8-11 to submit a short story (100 words), poem or picture of their own favourite places and spaces.

A series of fun and engaging workshops were held at some of the participating schools. Professional actor, Mark Montinaro, delighted and enthralled the wide-eyed audience, magically bringing to life Dylan’s story of his childhood memories and adventures. This was followed by poet and author Mab Jones, who further ignited the pupils’ imaginations through a wonderful series of inventive word games and interactive exercises that had pupils outlining and creating drafts of their competition entries

A near 800 pupils submitted a broad ranging variety of wonderful entries from a range of schools the length and breadth of South Wales. Our judges were left with a very hard task in selecting this year’s winners!

The overall winner of the competition was 11 year old Darcy Hurford from Pontlliw Primary School, whose brilliant entry ‘My House’ also won a large selection of books for the school library. 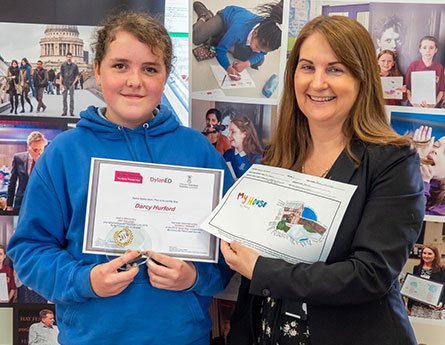 Head judge of the competition, Mab Jones said: We’ve chosen Darcy as the overall winner because she has so beautifully combined illustration and creative writing, in a really unique way. It was incredibly hard to whittle down to just eight winners from the staggering amount of high quality entries received, but all of the judges were in agreement that Darcy’s entry stood out from the very beginning due to its beautiful uniqueness. Congratulations to all who took part!

Take a look at this year's winners and their winning entries here.