As part of the 2018 International Dylan Thomas Day celebrations, DylanED invited primary school pupils aged 8-11 years in the Swansea Bay area to participate in a fun and engaging creative competition.

Entitled My Holiday Memories the competition was based around the 1946 radio broadcast Holiday Memory - Dylan Thomas’ classic recollection of the sights and sounds of sunshine-laden bank holidays spent with his family as a small boy on the lively Swansea seashore. Following in the footsteps of Dylan, the competition asked pupils to submit a short story, poem or picture depicting their own fondest holiday memories.

Participating schools were provided with a fascinating insight into the Swansea writer’s story, gaining a sense of what it was like to be a child at the seaside in the 1920s through animated performances of the piece by actor Mark Montinaro and word-based workshops with Dylan Day Coordinator and poet Mab Jones. These sessions it seems, provided perfect inspiration!

Head Judge of the competition, Mab Jones said, 'Hundreds of entries were received, and both myself and the other members of the judging panel were very impressed by the way that children from our local schools really embraced the activity and illustrated their holiday memories so vividly. Although we’ve had a wonderful time reading humorous holiday tales and marvelling in the beautiful, colourful illustrations, it provided us with a very tough task in selecting a group of winners!' 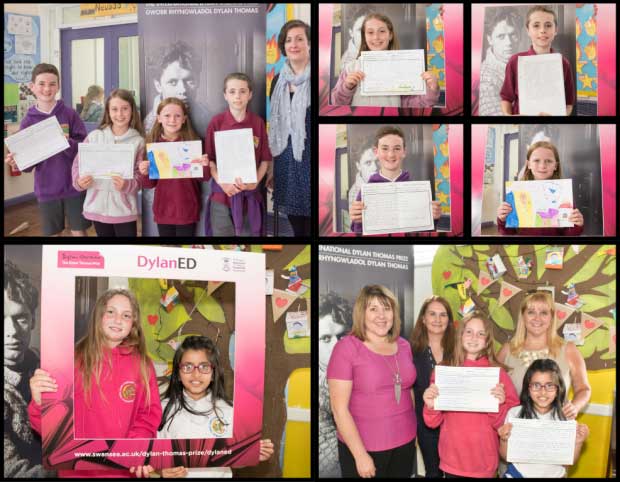 This year’s winners are:

The overall winner of the competition is 10 year old Nia Jones from Waunarlwydd Primary School, whose brilliant retelling of her sunshine-laden and action-packed caravan holiday to Porthcawl also won a large selection of books for the school library.

Kirsty Williams, Literacy Coordinator at Waunarlwydd said, 'The children thoroughly enjoyed and engaged in the presentation of Dylan Thomas' Holiday Memory.  The work they produced in response was creative and imaginative. We have always known how talented our children at Waunarlwydd are, so to have five fantastic winners in this competition is a truly wonderful achievement and perfectly illustrates the talent that the pupils and the school contains.’

Deputy Headteacher of Gors Community School, Ceri Raisbeck said 'Our KS2 pupils at Gors Community School really enjoyed finding out about Dylan Thomas and participating in the Dylan Day competition. They were delighted at their achievement and their peers shared in their joy at winning. As a school we found the whole competition a very positive experience and one which we look forward to participating in again.'

We’d like to thank and congratulate all the schools and pupils that took part and we hope you create more fantastic holiday memories this summer!