Beginning in 2008, CREW has invited applications at any time from scholars on sabbatical or other kinds of leave who would like to be based at Swansea for a period of up to 12 months.

Visiting Scholar awards may be held by full-time academics, at any grade, for a period of up to 12 months. Up to three awards are made in any one academic year.

To apply, please send a CV and letter outlining your research project to:

Preliminary enquiries may be made by email to:
k.bohata@swansea.ac.uk 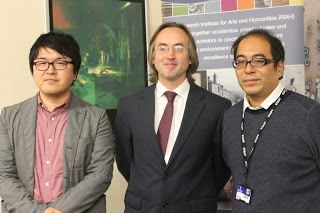 My year as a Richard Burton Centre Fellow at Swansea University turned out to be very productive thanks to the Richard Burton Archive and the untiring support from its staff, and to the staff and students of CREW. My two main aims in Swansea have been to make research the Raymond Williams archive, which is a part of the Richard Burton Archive, and more generally to develop my knowledge of Welsh writing in English. Specifically, what I tried to do was to look in detail into the formation of Raymond Williams's famous book Culture and Society (1958). I was also interested in fictional works by Raymond Williams, and the archive turned out to hold a vast collection of unpublished or unfinished fictional works. I feel that a year was far from enough to exhaust such vast materials, and although I made many discoveries and my research progressed at the archive, it still gives me a good reason to come back to Swansea again.

I was also very happy to be part of the research community of Swansea University. The attendance at an MA course in Welsh writing in English broadened my view on the subject, and my project on Lewis Jones (about whom I finished a book chapter during my stay in Swansea, to be published next year, I hope) was greatly inspired by it. Also, the Raymond Williams Reading Group, which was organised by Professor Daniel G. Williams, gave me a great opportunity not only to learn how Raymond Williams can be read in various productive ways now in Wales, but to get to know such inspiring Raymond Williams scholars who gave papers at the meetings.

Apart from, or along with, these scholarly achievements, to get the firsthand experience of the culture and life of Wales was an invaluable gain for me. Socially and politically, we have to admit that the year I spent in Wales was a year in turmoil, as, for instance, the troubles with the Tata steelworks in Port Talbot, the results of the Welsh Assembly election and, above all, of the EU referendum will show. But these experiences helped me understand in what context Welsh writers were and are writing. After all, as a scholar of literary studies, getting down to 'experience' (however remote it may seem) is vital. In addition, I really appreciated the welcoming spirit which we -- I and my family -- encountered in Swansea. This was the first experience for me and my family to settle in a foreign place, but not only those at the university, but my neighbours and the teachers and school friends of my children were always ready to help us, and we were able to enjoy our stay fully thanks to that. Lastly, my gratitude goes to the staff and the students at Swansea University. It would have been an honour to get to know them even briefly, but the honour was doubled by the fact that I was able to feel that I was really the part of this learning community. I hope our academic exchanges will last. Our friendship certainly will.

I stayed as a visiting fellow at Swansea University from September 2015 to August 2016. The main purpose of my visit was to explore the Raymond Williams Papers, especially materials relating to his novels. By being in close contact with the people of Swansea University and of Wales, I hoped to learn various concepts that would be necessary to interpret Williams’s works. Above all, I wanted to understand the intention and motivations informing the writing of Raymond Williams’s last novel People of the Black Mountains (1989-90). I supposed that ‘placeable bonding’, a phrase found in his controversial essay ‘The Culture of Nations’ (1983), would be one of the keys to deciphering this posthumous novel; however, without the perspective of Welsh Writing in English, it was very difficult to describe Williams’s ‘place’ in relation to other writers in Wales and in England. And without that perspective, I also thought, my discussion on Williams would be too abstract. Looking back, I found it a remarkably fruitful year in which I did research at the Richard Burton Archives, read two papers at international conferences, and above all published a monograph in Japanese which had a strong emphasis on Wales and Welsh culture.

I am not exaggerating at all when I say that without auditing the MA course by Professor Daniel G. Williams, attending the Raymond Williams Discussion Group held every other week - always followed by a lively discussion with the various people gathered there - I wouldn’t have has such a productive year. My book written in Japanese titled Towards “My Socialism”: Raymond Williams and a Twentieth-Century Culture in Britain (Tokyo: Kenkyusha, 2016) features an analysis on Raymond Williams’s last novel People of the Black Mountains, probably the first substantial attempt in Japan. In analysing this work by Raymond Williams - a cultural critic and novelist famous even in Japan - what played an indispensable role was the term ‘Welsh Europeanism’, a concpet which we discussed on that MA course. Although I had understood the basic meaning of ‘Welsh Europeanism’ before going to Wales, it was the way in which the course dealt widley with Welsh Writing in English in the 20th century that helped me to grasp the significance of the phrase in its historical context, and its strong tension with other ideas and frames of identity. Something local and something universal are emphasised at the same time: this idea lying at the core of Williams’s ‘Welsh Europeanism’ turned into a lived experience, not an abstract concept, during my stay in Wales. It follows that ‘placeable bonding’ in Williams was not just ‘local’ but something to be held in common. Furthermore, a lecture by Dai Smith, Raymond Williams Professor at Swansea University, at the Discussion Group gave me another insight into this phrase which derived from the identity of the border. Dai Smith referred to a ‘deviousness’ in Williams, a necessary quality perhaps for the resilient people of the border country between Wales and England having to deal with conflicting cultures and loyalties.  This gave further insight into the phrase ‘placeable bonding’ and the novel People of the Black Mountains.

Lastly, I would like to express my deep gratitude for everything that my family and I have experienced in Swansea and in Wales, but can’t find a brief expression for that. Instead please let me introduce my wife’s words. She said: ‘I actually had no knowledge about Wales before coming here, but I found myself in deep love with Wales at some point during my stay!’ I think she felt ‘placeable bonding’ with this place, and please let me say the same thing and hope our friendship and academic collaboration will last for a long time.