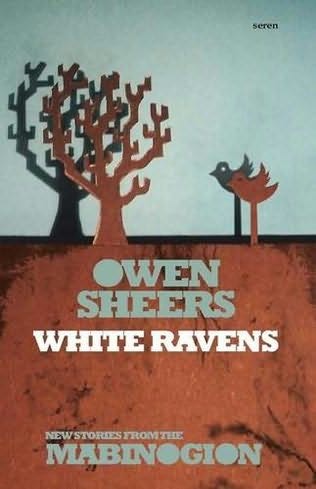 In the first line of the introduction to Seren’s 'New Stories from the Mabinogion', Penny Thomas legitimately suggests that “some stories, it seems, just keep on going.” Although the series editor then goes on to painfully romanticise such stories as being “a whistle in the reeds, a bird’s song in your ear”, the opening eight words of this introduction are enough to suggest why Seren have commissioned this series. There is evidently a market for the modern retelling of ancient myths, as Canongate’s recent sequence has shown, but the overriding impression is that the Bridgend publishing company are not simply cashing in on this apparent readership, but helping to create a Mabinogion manuscript for the new millennium. As we enter the second decade of the 21st century, almost a thousand years since the alleged origins of the  myth cycle, Seren ensuring these ancient Welsh stories do indeed “keep on going”.

For this series, the eleven tales of the Mabinogion will be retold by eleven contemporary Welsh authors, with two novellas released each October. Within the first two novellas released is Owen Sheers’ White Ravens, a retelling of the second branch of the Mabinogion (Branwen, Daughter of Llyr). The re-imagined second branch is largely set during the Second World War, familiar territory for Sheers following 2007’s Resistance, and moves between a lonely Welsh farm, the Blitzed streets of London and the green hills of neutral Ireland. Sheers partners the ancient myth of Branwen, a woman who suffers at the hands of those intended to protect her, with the long-upheld mythical belief that if the ravens leave the Tower of London then the kingdom of Britain will fall.

When wounded Irish soldier Matthew arrives in Wales with orders directly from the Prime Minister’s office to collect a box of six Raven chicks, he meets the beautiful Branwen, whom he instantly falls in love with. Although this meeting of Wales and Ireland mirrors the opening section of the Mabinogion myth, Sheers frames this narrative within the story of Rhian, utilising aspects of the closing sections of the second branch to tell her 21st century story, one which is inextricably linked with that of Branwen and Matthew.

Commendably, Sheers does not attempt to offer us a direct modern adaptation of the ancient tale. Illogical facets of the myth, such as the talking bird reared by Branwen in Ireland, are dealt with in a way that anchors the magically mythic within modern reality, meaning that the narrative never confuses itself within the realms of fantasy. However, although Sheers admirably avoids confusing his reader by imaginatively transforming the mythical into the modern, White Ravens is somewhat let down by a seeming lack of coherence within what are, at times, weak narrative voices.

The novella’s first line, “Let me tell you something”, is a definite nod to the original oratorical nature of these tales, and sets a conversational tone for the 1st person narrator of the opening section, but you cannot help but feel that it would have been better for Sheers to write all of this novella within a third person narration, as it is when using this technique that the true quality of his writing shines through. As it is, the narrative voice of White Ravens tries to do too much. For the most part, this does not affect the story, as the reader becomes completely engrossed in the richness of Sheers’ imaginative third person narration, but when the author reminds us that this tale is being told from the lips of the Old Man we begin to wonder where his voice has gone, so abruptly and inexplicably has it been replaced by the author’s own.

However, despite the problems of its narrative voice, White Ravens is a wholly enjoyable and worthwhile adaptation of the second branch, succeeding in its attempt to hold the old tale at the heart of the new and illuminate the eternal self-imposed conflicts of the human race. Although the quote from Dannie Abse featured on the novella’s cover (“Hauntingly imaginative...”) is the type of obscure puff well-liked by publishers, Sheers’ contemporary adaptation of ‘Branwen, Daughter of Llyr’ is certainly imaginative to the point that it does indeed “remain in the consciousness, [and is] not quickly forgotten”.1

1 Dictionary definition of the word ‘hauntingly’

Rhys Owain Williams is a postgraduate student, pursuing an MA in Creative Writing at Swansea University.