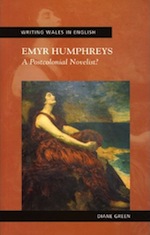 ‘A Question of Place’

Twenty years ago, Bill Ashcroft, a cultural theorist in the vanguard of postcolonial studies, observed that ‘above all, the post-colonial is a discourse of place.’  Diane Green’s book provides material evidence that Emyr Humphreys was aware of this idea many years earlier. She sustains a convincing argument for one of the ‘defining figures’ of Welsh Writing in English in the last fifty years to be examined in postcolonial terms, both in respect of Wales in a period that is post-colonization, and through postcolonial methods that read across literary and cultural boundaries.

Green provides an overview of the contentious issues and ‘problems involved with bringing postcoloniality into a discussion’ of  Humphreys’ fiction. Her understanding of the complexities of his texts suggests that these problems are actually opportunities to ‘place’ him as a postcolonial writer through particularized concerns regarding Welsh language, nationalism and politics. He is thus regarded as ‘the voice of the tribe’ - a Welsh People’s historian to whom events such as the Penyberth bombing campaign of 1936 is especially important. But, what becomes clear is that he writes within the wider sweep of colonial history: the First World War, for instance, ‘dramatically affected the world into which he was born’ in 1919.

Green traces Humphreys’ ‘emergence’ as a postcolonial writer. She stresses that his techniques develop into ‘strategies of liberation’ that ‘explore Wales’s postcolonial condition.’ However, when the book moves to analyses of his texts, this idea of development suggests a potential problem in that A Toy Epic (1958) and Outside the House of Baal (1965) are identified as the author’s ‘major’ works. Since, at the publication of the latter, over forty years (and counting) remained of his writing career, this may be taken to hint at a pattern of achievement and decline. Green adroitly negotiates this idea by investigating the way in which Outside the House of Baal consolidates his postcolonial strategies - polyvocal narratives that convey multiple notions of identity, for example - and provides a foundation on which to build, rather than to rest.

A Postcolonial Writer? is interrogatory in nature. For instance, it emphasizes the significance of Welsh ‘indigenous history’ in the sequence of seven novels, ‘The Land of the Living’ (1971 – 1991), but also examines the way in which these narratives of individual lives are set both against and alongside the grand narrative overview of ‘colonial British’ history. The effect of Green’s approach is to bring out the dichotomies in the texts. She notes that the idea of Humphreys instrumentally writing for and about the indigenous ‘tribe,’ including his use of Celtic myth as an organizing device, potentially limits his narrative positioning; by implication, this strategy also conditions his ‘exploration’ of a Welsh identity that is ‘constantly changing’ in its relation to the external world.

Yet, what emerges from Green’s own narrative strategy is a view of Humphreys as a writer operating simultaneously inside and outside his ‘place.’ The later novels are shown to display the ambivalence of Welsh identity through an understanding that comes with a lifelong consideration of national issues. Particularly interesting is Green’s discussion of the ‘discrepancies’ between two of Humphreys’ literary methods, namely his postcolonial formation of ideas of Welshness, and his postmodern deconstruction of colonial metanarratives. Her analysis succeeds most in the identification of his texts’ existence in the gap between these two ‘places.’ In this respect, her book poses intriguing questions for those of us interested in cultural production and the postcolonial discourse of identity.

Steve Hendon (Cardiff University) is a undertaking a PhD in literature.