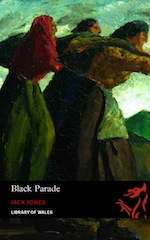 Few periods in Welsh history can compete with the interwar years in either historical intensity or their proletarian writings. The trauma of unemployment and economic depression prompted several of the most famous examples of Welsh writing in English. Lewis Jones’s twin novels Cwmardy (1937) and We Live (1939), Jack Jones’s Rhondda Roundabout (1934), and Gwyn Jones’s Times Like These (1936) all resonate with the temperament of the period. They are all overshadowed by Richard Llewellyn’s How Green Was My Valley (1939) in popularity of course but a case can be made for Black Parade (1935) as being the far more accurate and representative novel of the Valleys and their tumultuous history.

The novel is set in Jones’s native Merthyr; as the talisman of industrial South Wales the setting emphasises the blurring of fiction and fact that so marks Welsh novels of the thirties. Indeed, the novel, throughout, introduces us to historical characters – A. J. Cook, the miner’s leader; Wal Hannington, the Communist activist and writer; Lloyd George, Keir Hardie, and D. A. Thomas all get a mention – all of which underscores the realism that shoots through the story.

But Jones does not pontificate; his activism is there but there is always the matriarchal scepticism of Saran to temper the political. For however vibrant Labourism in Wales was it was always moderated by the morality, above all, of women and their small-c christian conscience.

After all, Black Parade began life as a novel entitled Saran and it is with Saran Morgan that we are guided through the narrative. There are, as a consequence, observations that provide fascinating commentary on fin-de-siècle gender relations. The funeral at the conclusion of the novel is a male only affair (as was Welsh custom); Saran’s principal role as mother and homemaker is summed up in the following passage as she sees the lads off to war. Asked whether she wants to go for a walk Saran replies: ‘with all the washing as I’ve been leaving and leaving wanting to be done?’ (p. 316).

Resigned as they were to such gendered worlds we, as a modern audience, are reminded quite how much and simultaneously how little has changed for women in a century. Men dominated politics. Men went off to war. But in the end it was women who provided the continuity and so it is with Saran Morgan. Not for her the political activism exhibited by Mair in Lewis Jones’s contemporary novels.

The true protagonist, though, is far from human. For a novel set in Merthyr and written by a Merthyrian could hardly escape reflecting upon the cradle of the Welsh industrial revolution. Merthyr begins the novel as a town very much lacking in the accoutrements of modern urbanity and by the end has grown into a fully-fledged civic centre replete with parks, a town hall, and civic pride. Cook, after all, holds his mass rallies not in the aristocratic gardens of Cyfarthfa or Penydarren Park but in Thomastown Park: the former coal tip turned public recreation ground built by the local council.

The Wales that greeted the Great War had grown into an adult but one that faced an uncertain future. Mark Twain once remarked that history does not repeat itself, but it does rhyme. This is why the reappearance of Black Paradein the Library of Wales collection is both timely and portentous. Our own new Wales, barely a decade old, stares at a fork in the road and the thing, as Black Parade suggests, is to take the road less travelled.

Daryl Leeworthy (Swansea Univeristy) is a undertaking a PhD in History.