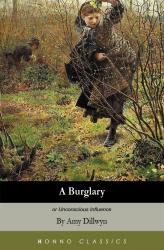 Twenty years ago the Swansea author Amy Dillwyn was known, if at all, as a rather eccentric Grand Old Lady still remembered for her mannish clothes and for smoking cigars.  When her biography appeared in 1987 a fuller portrait emerged of a splendidly clever woman who openly defied Victorian convention, ran a major industry virtually single handed and, incidentally, published several forgotten but very readable novels.

Until quite recently few readers have had any opportunity of finding out just how readable her fiction might be, but now thanks to the pioneering Honno Classics series we have seen attractive reprints of two of Dillwyn’s early novels with the possibility of more to follow.  The first The Rebecca Rioter (1880) has already been well received and we now have A Burglary or, ‘Unconscious Influence’ first published in three volumes in 1883 and newly introduced with a perceptive and stimulating essay by Alison Favre.

Like all Dillwyn’s fiction this story is essentially a scathing indictment of the upper class society to which she herself belonged by reason of her father’s privileged status as leader of the Welsh Liberals in the house of Commons.  Her previous novel, Chloe Arguelle (1881) had ended with a stirring call to what she called ‘a crusade’ against the humbug of High Society.  In A Burglary she continues her crusade and once more sets it in the context of the kind of sensation plot that owed much to the popular fiction of best-selling women authors like Rhoda Broughton and Mary Braddon, whose Lady Audley’s Secret (1862) had set a precedent Dillwyn was keen to emulate.  She had even ended Chloe Arguelle with a double murder but her publisher, Macmillan, had found that climax just a little too sensational so in 1883 she took her next novel to William Tinsley whose monthly magazine also published tow of her short stories earlier in that year, one of which also centred on a burglary.

Interestingly enough, by the time A Burglary appeared Dillwyn had already acquired a growing international reputation as a radical critic of Victorian values with her first two novels.  The London Daily News in 1880 hailed The Rebecca Rioter as an astringent antidote to Dickens’ sentimental treatment of the working classes and both that novel and Chloe Arguelle had been translated into Russian by the liberal intelligentsia who saw them as striking attacks on bourgeois hypocrisy.1

But A Burglary is far from being a radical polemic since Dillwyn had no ambition to be a political novelist like Disraeli or Trollope.  It is simply a rattling good read with all the elements of the sensation novel in full play: criminality, thwarted romance, a catastrophic (and symbolic) fire, spiced with a nice sense of wry humour and gentle sarcasm at the expense of pretension and snobbery.  In the quest for authenticity Dillwyn is even brave enough to try rendering the working class Welsh accents of some of her minor characters, always a formidable undertaking for any novelist anxious to avoid seeming to condescend to people less fortunate than themselves.

The firmly upper class Welsh heroine, Imogen Rees, resists following the conventional path to marriage until the very last scene and even when she accepts her wealthy suitor, Sir Charles Dover, she does so with a sceptical commonsense that clearly reflects Dillwyn’s own distaste for sentimental endings, just as the racy scenes between Imogen and her young brother Ralph clearly mirror Amy’s wonderful tomboy childhood with her brother Harry at their Swansea home at Hendrefoilan.  Because much of the novel is autobiographical, like so much of Dillwyn’s fiction, there is a first-hand freshness about the writing that makes for easy reading.  And it is a mark of her narrative skill that her gentlemanly villain, Sylvester, is a complex character, half criminal, half hero, whose distorted love for Imogen brings about his redemption when he rescues her from an horrific fire which provides the sensational climax of the story.  It is this power of redemption that explains the ‘Unconscious Influence’ of the subtitle, the power of good over evil, and the unconscious influence of Imogen over Sylvester that underlies the whole narrative.

Imogen herself is far removed from what we regard, perhaps too readily, as the stereotyped Victorian heroine in that she often finds her women friends altogether more attractive than many of the mediocre men she encounters; another theme that recurs throughout Dillwyn’s fiction.  And the pivotal point of the plot, the daring jewel burglary carried out by Sylvester which is then blamed on an innocent poacher, is another favourite device which occurs several times in her novels and stories.  But she draws a subtle contrast between the insidious villainy of the middle class Sylvester and the illegal activities of the poacher, Richards, which spring not from any innate evil but from the squalid poverty of his everyday existence.

We need look no further than her ancestral Quaker background to realise what lay at the heart of Dillwyn’s desire for fair play and social justice, whether in life or art.  For all its redeeming humour and sense of fun the novel is based on a serious foundation of genuine sympathy for the great Victorian underclass without ever falling into the trap of Dickensian sentimentality.  Imogen’s belief that a more liberal use of soap and water should come before more radical cures for social deprivation is typical of Dillwyn’s strongly held conviction that although the poor deserve sympathy and understanding they do not need to be patronised or sanctified.

Dillwyn began to write novels because the daily tedium of her leisured life at home in Hendrefoilan failed to satisfy her well-cultivated intelligence.  She felt the need for action but could not see how to use her intellect in practice until she decided to follow the fashion for sensational fiction and then all the omnivorous reading she had absorbed over the yeas of inactivity found an exciting outlet.  Buoyed up by the successful publication of The Rebecca Rioter and Chloe Arguelle she could now fully articulate her social criticism under th guise of what is at one level a detective story and the result is A Burglary.  Because it conveys a powerful sense of her own bold and original personality, open minded, and often miles ahead of its time, this engaging tale, half melodrama and half social document, fully deserves to be looked at afresh and brought to a new audience hitherto unacquainted with the story-telling skills of one of Wales’s brightest Victorians.

Favourably reviewing the novel in the Spectator in 1883 the editor, R H Hutton, went so far as to claim that the ironic detachment with which Imogen finally accepts her indefatigable suitor had ‘a touch of Miss Austen’.  High praise indeed and now a new generation of readers can for the first time judge its validity for themselves.

David Painting is the author of the biography Amy Dillwyn (University of Wales Press, 1987).

1 My thanks to Kirsti Bohata who recently brought these Russian translations to light.